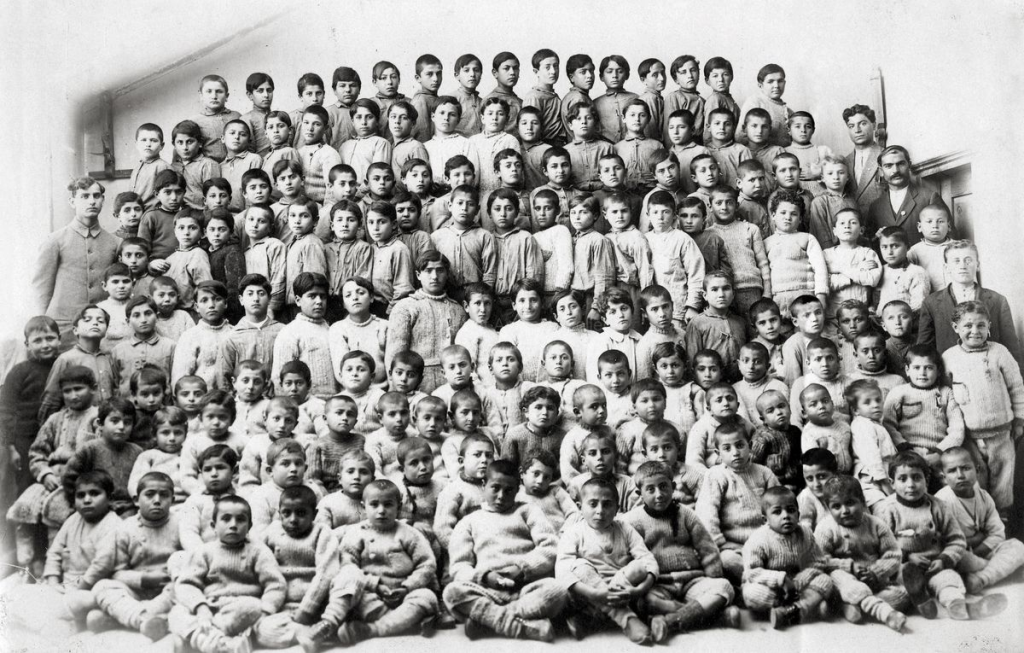 (Armenian orphans group together for a photo after the end of WWI in Anatolia College, which sheltered more than 2,000 orphans in Merzifon in 1918. As a consequence of the Armenian Genocide hundred thousands of Armenian children were left orphaned, many were converted to Islam, and were given Turkish names (Photo: Tsolag Dildilian/ Trustees of Anatolia College)

(A.W)- On Feb. 9, reports surfaced that over 4 million Turkish citizens had attempted to access the online government system (known as “e-Devlet”) seeking access to their family tree. Regardless of whether the figure is accurate, it is clear that the high volume of traffic to the website at first slowed and ultimately forced the shutdown of the system, which had only recently been opened.

The reason for the extraordinary interest in these family tree reports was the claim that they contained much more information than previously available—information dating back as the early 1800s in some cases. In addition, this was the first time such information was so easily accessible online from anywhere in the world. The internet soon filled with stories of Turkish citizens learning of Armenian and other ancestry they had not known about previously.

The system remained closed for approximately a week, during which a message on the website indicated improvements were being implemented to handle the traffic. Now open again, a new process and daily limits have been employed to maintain the functioning of the website. Since the system has reopened, it is also being reported that 8 million Turkish citizens (about 10 percent of the population) have requested the new pedigree table. However, many questions remain regarding exactly what information is available, the implications for those with Armenian ancestry and, more broadly, all Turkish citizens today.

I have reviewed a very limited sample of the new “Alt ÜSt Soy Belgesi̇” (referred hereafter as NEW) as well as the previously available “Nüfus Kayıt Örneği” (referred to hereafter as OLD), in some cases for the same people. While the sampling is small, some patterns have emerged. I have attempted to reverse engineer the process used to create such documents based on a small sample as well as a limited knowledge of the sources that would have been used as inputs to that process.

The OLD reports I have seen only supplied information on people who attained an identification number issued during the post-1923 modern Republican period of Turkey. The person’s name, surname, parents’ names and dates of birth and death were listed. The religious affiliation was also indicated as well as the date of conversion when the affiliation changed. A page from an early population register (1883-1903) for the family of Terzi Yaghoub, son of Ibrahim (Scanned image, courtesy of George Aghjayan)

The dates from early records were converted to the modern calendar. In many cases, early deaths are missing exact dates. There is also a date of registration. In some cases, the date is missing while in others it is many years after the date of birth.

The NEW report does not include a person’s identification number nor a date of registration. The NEW report traces all known ancestors of a single person. Each person is listed with surname and parents’ names, date and place of birth, marital status and date of death. There is a specific reference to address though no indication for the time period the address was in use. There are no explanatory footnotes to the report.

I have not seen any examples where the date of death was shown to be prior to 1905.

The names shown for those known to have converted during the genocide are the Muslim names. However, the Christian names of their parents are shown.

There are examples of known Armenian ancestors listed as Muslim without any reference to their Armenian origins. In addition, those with very close DNA matches to Armenians have only Muslim names in their report even in cases where oral tradition supports the Armenian ancestry of the family.

I have seen at least one example where known ancestors alive during the Republican period are not connected to their descendants’ reports. This is hard to explain as anything but a clerical error. On Feb. 9, reports surfaced that over 4 million Turkish citizens had attempted to access the online government system (known as “e-devlet”) seeking access to their family tree (Logo: https://www.turkiye.gov.tr/)

Results vary significantly and the variation would seem to be mostly correlated to the number of ancestors alive at the time the 1905 Ottoman registration system was initiated. However, at least some of the results I have seen indicate the link to the Ottoman registration was not possible. In my own family, this is the case as no additional information is available for my great-great grandparents, even though they were alive in 1908 as indicated by the report of one of their daughters.

One item that has confused some people is the common occurrence of dates shown as 01/07/YYYY. I have seen at least a few people view this as indicative of the arbitrariness of dates in general. However, my view is simply that the exact date was not known or recorded (e.g. when only age is recorded) and, thus, July 1 was chosen as the mid-point of the calendar year. This is a common practice in demography.

It is outside the scope of this article to detail the complete history of population registration from Ottoman to Republican Turkey. However, it is important to understand the foundations of the current system in order to help explain the NEW reports.

Over the past decade, Turkey has moved to an address based electronic identification system for its citizens. The unique identification number is meant to serve as a link among numerous government information systems. In theory, the new system is linked to the family registration files. Thus, the OLD and NEW reports display the information contained in the family registration files.

For the Republican period, the family registration file should be complete yet the potentially significant gap between birth and registration could lead to complications. In addition, errors could be introduced during the conversion from paper to electronic systems. The real question though is how the link was made to Ottoman era information.

I have viewed examples of the late Ottoman registration system begun in 1905 for Palestine. There were preliminary and basic registers as well as registers for specific vital events (e.g. divorce, death, migration, etc.). Having worked with this data, I view it as near impossible to link specific people on a universal scale without a unique identification number. Such linkage requires a person registered properly during the Ottoman period, lived into the republican period and was issued a unique identification number. “They made me an Armenian overnight” reads one tweet from @ozncmgrel, accopanied by the #edevlet hashtag. Several Turkish citizens took to social media to share that they had Armenian roots after the records were made public. (Screengrab: Twitter)

It is rare for an Armenian to meet all three requirements. It is commonly accepted that women and children were under-registered in the Ottoman Empire (and even into the Republican period). Yet this is the demographic that most often survived the genocide and remained in Turkey. Thus far, the evidence seems to also indicate that those who converted to Islam prior to the genocide would not receive information on their original Christian names. Throughout the 1800s and even earlier, many thousands of Armenians were coerced into converting—the reasons too numerous to list here. The Armenians with Turkish citizenship and pre-genocide origins in Istanbul would seem to be the most likely to gain insights from the NEW reports.

There are other issues specific to surnames and methods of identification.

(For a more detailed example of the methods used to link families across multiple source records and the complexities specific to Armenians in the Ottoman Empire, please refer to Aghjayan’s in-depth article for Houshamadyan.)

The opening of information contained in the family registration files is welcome, particularly as it relates to its foundational data from the late Ottoman period. As such, there is no longer any reason to block access to the census registers from the last years of the Ottoman Empire.

Currently, researchers are only allowed access to census registers that date to prior to 1850 and the regions where Armenians predominantly lived are underrepresented in availability.

My hope is that the Turkish government will now make accessible the population registers from the early 1900s to all researchers.