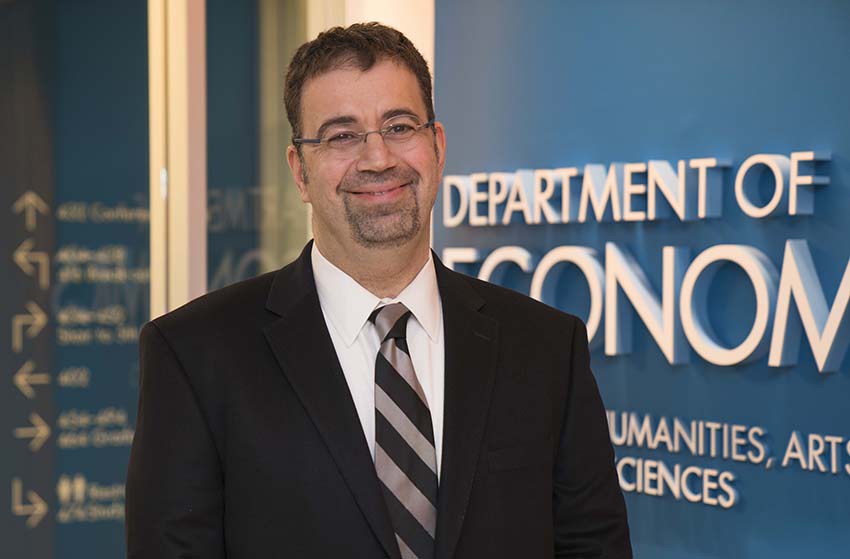 Acemoglu is one of two MIT professors earning that distinction in 2019. The other, political scientist Suzanne Berger, has been named the inaugural John M. Deutch Institute Professor.

“As an Institute Professor, Daron Acemoglu embodies the essence of MIT: boldness, rigor and real-world impact,” noted MIT President L. Rafael Reif. “From the John Bates Clark Medal to his decades of pioneering contributions to the literature, Daron has built an exceptional record of academic accomplishment. And, because he has focused his creativity on broad, deep questions around the practical fate of nations, communities and workers, his work will be essential to making a better world in our time.”

In a letter sent to the MIT faculty today, MIT Provost Martin A. Schmidt and MIT Chair of the Faculty Susan Silbey noted that the honor recognizes “exceptional distinction by a combination of leadership, accomplishment, and service in the scholarly, educational, and general intellectual life of the Institute and wider community.” Schmidt and Silbey also cited Acemoglu’s “significant impacts in diverse fields of economics” and praised him as “one of the most dedicated teachers and mentors in his department.”

Nominations for faculty to be promoted to the rank of Institute Professor may be made at any time, by any member of the faculty, and should be directed to MIT’s Chair of the Faculty.

“I’m greatly honored,” he says. “I’ve spent all my career at MIT, and this is a recognition that makes me humbled and happy.”

At different times in his career, Acemoglu has published significant research on topics ranging from labor economics to network effects within economies. However, his most prominent work in the public sphere examines the dynamics of political institutions, democracy, and economic growth.

Working with colleagues, Acemoglu has built an extensive empirical case that the existence of government institutions granting significant rights for individuals has spurred greater economic activity over the last several hundred years. At the same time, he has also produced theoretical work modeling political changes in many countries.

He has researched the relationship between institutions and economics most extensively with political scientist James Robinson at the University of Chicago, as well as with Simon Johnson of the MIT Sloan School of Management. However, he has published papers about political dynamics with many other scholars as well.

Acemoglu has also been keenly interested in other issues during the course of his career. In labor economics, Acemoglu’s work has helped account for the wage gap between higher-skill and lower-skill workers; he has also shown why firms benefit from investing in improving employee skills, even if those workers might leave or require higher wages.

In multiple papers over the last decade, Acemoglu has also examined the labor-market implications of automation, robotics, and AI. Using both theoretical and empirical approaches, Acemoglu has shown how these technologies can reduce employment and wages unless accompanied by other, counterbalancing innovations that increase labor productivity.

In still another area of recent work, Acemoglu has shown how economic shocks within particular industrial sectors can produce cascading effects that propagate through an entire economy, work that has helped economists re-evaluate ideas about the aggregate performance of economies.

Acemoglu credits the intellectual ethos at MIT and the environment created by his colleagues as beneficial to his own research.

“MIT is a very down-to-earth, scientific, no-nonsense environment, and the economics department here has been very open-minded, in an age when economics is more relevant than ever but also in the midst of a deep transformation,” he says. “I think it’s great to have an institution, and colleagues, open to new ideas and new things.”

Acemoglu has authored or co-authored over 120 (and still rapidly counting) peer-reviewed papers. His fifth book, “The Narrow Corridor,” co-authored with Robinson, will be published in September. It takes a global look at the development of, and pressures on, individual rights and liberties. He has advised over 60 PhD students at MIT and is known for investing considerable time reading the work of his colleagues.

As a student, Acemoglu received his BA from the University of York, and his MSc and PhD from the London School of Economics, the latter in 1992. His first faculty appointment was at MIT in 1993, and he has been at the Institute ever since. He was promoted to full professor in 2000, and since 2010 has been the Elizabeth and James Killian Professor of Economics.

Among Acemoglu’s honors, in 2005 he won the John Bates Clark Medal, awarded by the American Economic Association to the best economist under age 40. Acemoglu has also won the Nemmers Prize in Economics, the BBVA Foundation Frontiers of Knowledge Award, and been elected to the National Academy of Sciences. This month, Acemoglu also received the Global Economy Prize 2019, from the Institute for the World Economy.