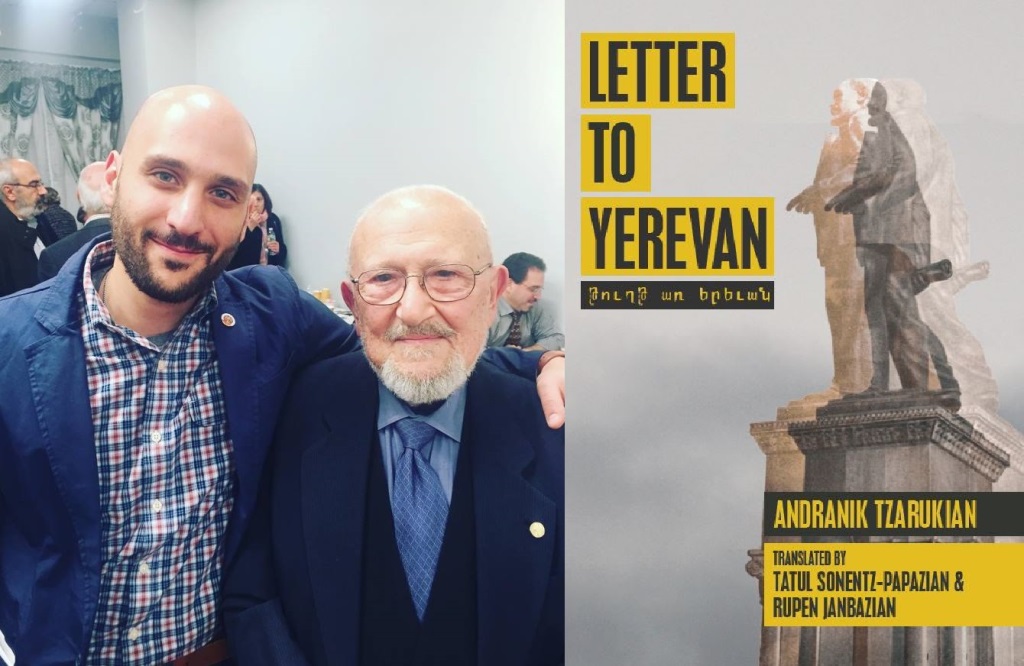 Sonentz-Papazian and Janbazian’s English Translation Available Now on Amazon.com. All Proceeds to Be Donated to the Hairenik Association’s Newspaper Digitization Project.

Written in 1944 in response to Soviet Armenian writer Gevorg Abov’s «Մենք չենք մոռացել» (“Menk chenk moratsel,” “We Have Not Forgotten”), and published the following year, «Թուղթ առ Երեւան» (“Tught ar Yerevan,” Letter to Yerevan”) made Tzarukian a prominent voice in the Armenian Diaspora almost overnight—from the Middle East to Europe and the Americas.

The poem was republished more than a dozen times in various Armenian communities—including in Syria, the United States, Lebanon, and Cyprus—up until the early 1990s, and as a result became a source of inspiration for tens of thousands.

“Letter to Yerevan (1945) is urgent and timeless. It may seem easy to turn the page on an oeuvre penned in a political context that no longer exists. Yet Andranik Tzarukian’s powerful poetic rebuttal continues to resonate. When, as in the aftermath of the Velvet Revolution in Armenia, ‘Dashnak dogs’ and other Abov-esque tropes are unleashed, Tzarukian’s Letter is the best antidote. Hence its urgency. When history is distorted and ‘alternative facts’ are tossed around, Tzarukian’s Letter is highly relevant. Hence its timelessness,” said Columbia University professor and member of the ARF Bureau Dr. Khatchig Mouradian on the occasion of the book’s publication.

The English translation of Tzarukian’s poem was announced on May 28, 2017—the 99th anniversary of the establishment of the First Republic of Armenia (1918-1920)—and published in book form on Dec. 24, 2018—74 years to the day that Tzarukian sent his lengthy rebuttal to Abov’s publisher in Soviet Yerevan.

“Translators Sonentz-Papazian and Janbazian, two generations apart, are themselves testament to the enduring power of this work that reaches English-language readers on the 100th anniversary of the First Armenian Republic,” added Mouradian.

Parts of Sonentz-Papazian and Janbazian’s translation were periodically published in the Armenian Weekly between 2017 and 2018.

“Making foundational texts like Tught ar Yerevan available in English can only create opportunities for such text to be read not only by Armenians but also by others. In translation, those texts can again inspire, becoming for English-speaking readers what they were for previous generations of Armenians,” Sonentz-Papazian and Janbazian said about the book, which also includes their translation of Abov’s “We Have Not Forgotten.”

The original Armenian version of the poem will also accompany the English translation in the 119-page book, which is available for purchase on Amazon and soon at the Hairenik Bookstore in Watertown. “We also hope that our humble attempt might prompt Armenian youth to engage with and learn Armenian, the language of the original text. That is why we found it integral to include the original Armenian—which has not been republished in decades—along with the translation,” the two added.

“The translators, editors, illustrator, and designers have all graciously donated their time and efforts to making the publication of this book a reality and for that, we are extremely grateful,” the Hairenik Association said in a statement.

Established in 1899, the Hairenik Press is the publishing division of the Hairenik Association of the Armenian Revolutionary Federation (ARF) of the Eastern United States. Its headquarters are located in Watertown (80 Bigelow Ave. 02472).