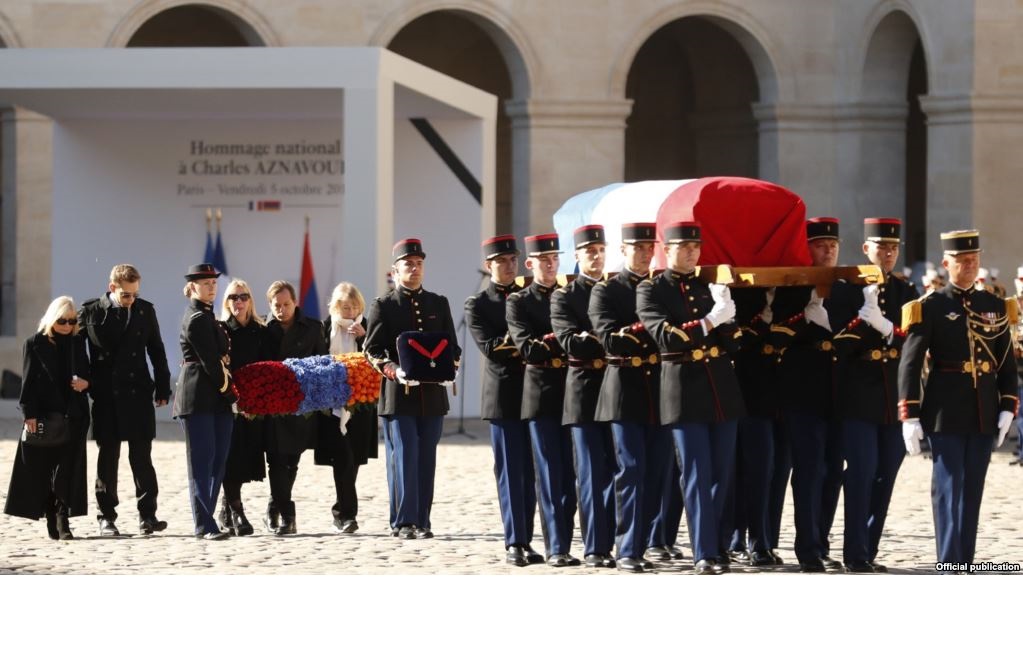 (Azatutyun)-France paid a moving national homage on Friday to Charles Aznavour, the late French singer of Armenian descent, in a ceremony in Paris attended by President Emmanuel Macron and Armenia’s leaders. Aznavour died at one of his homes in southeaster France on Monday at the age of 94. He will be buried on Saturday in a cemetery west of Paris.

Aznavour’s coffin was carried into the courtyard of Les Invalides military museum to the sound of haunting music played from a duduk, a traditional Armenian flute. An army band then played the national anthems of Armenia and France.

“Some heroes become French by spilling their blood. This son of Greek and Armenian immigrants, who never went to secondary school, knew instinctively that our most sacred sanctuary was the French language,” and used it like a poet, Macron said at the ceremony.

“In France, poets never die,” he added, standing before the coffin draped in the French national flag.

The French president also praised Aznavour’s “loyalty to his roots.” “Armenians of all countries, today I am thinking of you,” he said. “He was supposed to be one of us next week in Yerevan, his absence will leave a giant void.”

Macron will travel to the Armenian capital for a state visit and a summit of Francophonie, a loose grouping of French-speaking nations. He revealed on Monday that he had asked Aznavour to join him on the trip.

Pashinian, who had called the singer a “national hero,” said “every Armenian thinks of him as a kind of parent who has carried our name to the world and given Armenians a new pride.”

“A free and happy Armenia will be our response to the work you did for the Armenian people,” said Pashinian, who came to power after leading protests against the long-entrenched leadership of the former Soviet republic.

“I bow before you — a great Frenchman, a great Armenian, a great artist, and a great humanist,” he said. “Rest in peace, dear master.”

Aznavour, who sold more than 100 million records in 80 countries, was born Shahnour Varinag Aznavourian in Paris to Armenian parents. His global fame made him the most renowned member of France’s influential Armenian community.

The crooner was at the forefront of the community’s efforts to help victims of a catastrophic earthquake that devastated much of northern Armenia in 1988. He regularly visited the country in the following decades. A square in downtown Yerevan was named after him in 2001.

In 2004, Aznavour received Armenia’s highest state award, the title of National Hero, in recognition of his support for his ancestral homeland. Then President Robert Kocharian praised him for “presenting Armenia to the world.”

Aznavour will be buried in a private ceremony on October 6 in accordance with his family’s wishes, French newspaper Le Monde reported.

The Armenian government has declared Saturday a day of national mourning.