Genocide Remarks, A Cause for Banishment of MP Garo Paylan 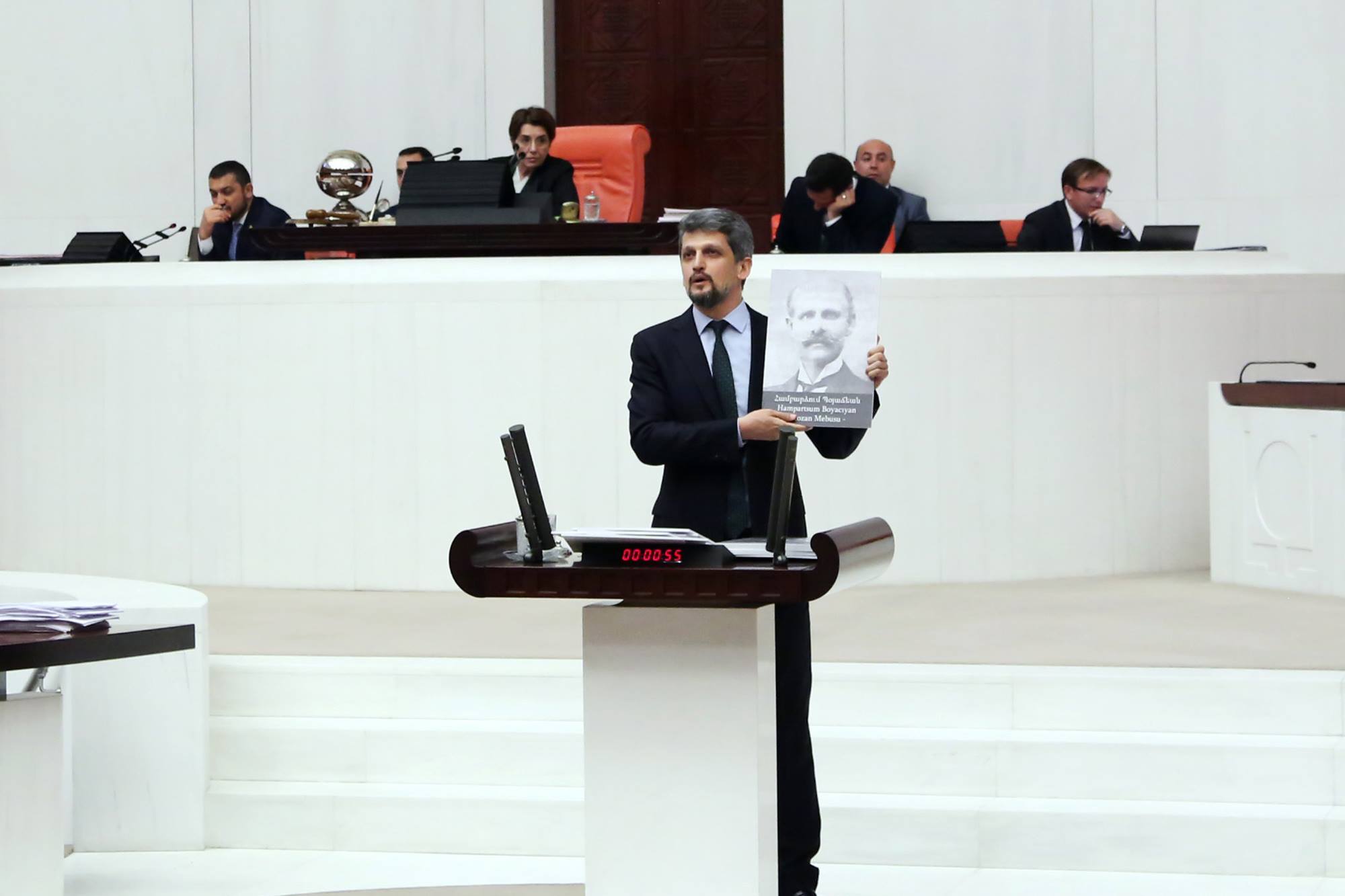 Istanbul-Armenian member of parliament, Garo Paylan, was temporarily banned from Turkey’s National Assembly after he used the term genocide to describe the deaths of Armenians at the hands of the Ottoman Empire a century ago, officials said on Saturday, January 14.

During a constitutional reform debate, Paylan, a lawmaker belonging to the pro-minority Peoples’ Democratic Party (HDP), said that Armenians had at one time made up 40 per cent of the Turkish population and now only constituted 0.1 per cent.  “Obviously, something has happened to us, and I call it a genocide.”  He added, “the Armenian people know very well what happened to them. I know very well what happened to my grandparents.”

Paylan said four communities had been lost and “driven from these lands in large massacres (and) genocides,” referring to Armenians, Assyrians, Greeks and Jews, according to Anadolu Agency.

Videos showed lawmakers from the the ruling Justice and Development Party (AKP) angrily interrupting Paylan’s speech. They called for Paylan’s expulsion from the assembly, claiming he had “insulted the Turkish nation”.  As a result, Paylan has been banned for three full sessions before he was allowed to return to his parliamentary seat.

Paylan’s comments came after a vicious fight broke out in parliament on Thursday as lawmakers voted on parts of the 18-article constitution bill which — if passed — will be put to a referendum at the end of March or early April.

Paylan “I will not stop saying what I believe in”

MP Garo Paylan is planning to appeal to the Constitutional court over the ban, Armenpress reports.

“I have repeatedly talked about the Armenian Genocide, I have brought [up] the issue of the Genocide and facing it [on]to the agenda. The ruling “Justice and Development” party entered into a coalition with the nationalists over the constitutional changes. Yesterday evening I said that it is necessary to confront the genocide in order to prevent the same mistake”, he said.

Paylan said he was removed from taking part in the three parliamentary sessions. “The AKP set such a punishment, although it doesn’t exist in the parliament’s rules of procedure. I was punished illegally”, he said.  Paylan added that the nationalist atmosphere which exists in Turkey today is cause for more freedoms to be restricted, and that until recently it was not taboo to speak of the Armenian Genocide, however the situation is now changed.

“In this new reality saying the term “genocide” is again being perceived as a crime. If I again say this word, perhaps the same punishment will be applied, but I will not stop saying what I believe in. At the moment my application [which will] be submitted to the Constitutional Court is being prepared. I am going to appeal also to the European Court of Human Rights. I think I will succeed”, Paylan said.

In response to a question regarding threats, the lawmaker said that of course he has received them however, he has many supporters. “Of course, negative reactions exist since we live in an atmosphere of nationalism. But I have supporters and will continue my fight.”