Iran, Turkey back Karabakh settlement based on Azerbaijan’s territorial integrity 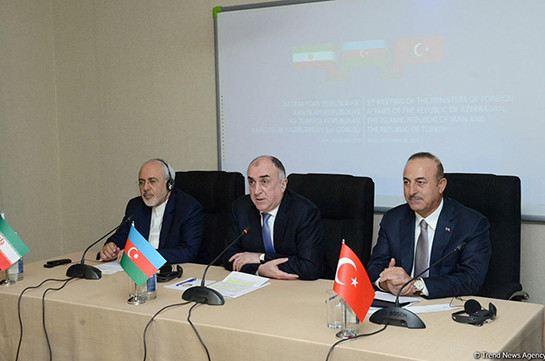 “PanArmenian” – The Foreign Ministers of Azerbaijan, Iran and Turkey met Tuesday, October 30 in Istanbul and stressed the importance of the settlement of the Nagorno Karabakh conflict on the basis of Azerbaijan’s territorial integrity.

According to the document, the foreign policy chiefs of the three countries “stressed their commitment to principles of international law, in particular, respect of and support for sovereignty, territorial integrity, inviolability of internationally recognized borders, peaceful settlement of all disputes, as well as non-interference in internal affairs.”

They also “reiterated in this regard the importance of the earliest resolution of Armenia-Azerbaijan Nagorno-Karabakh conflict on the basis of the above-mentioned principles.”