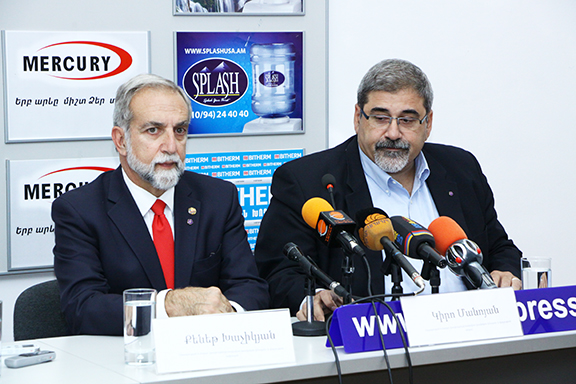 The Armenian Legal Center for Justice & Human Rights (ALC) – The establishment of a new Washington-based international legal institute was announced Wednesday at a press conference in Yerevan. The ALC will operate in the public interest and is dedicated to advancing sustainable solutions to the ongoing global, national, community, and individual costs and consequences of the Armenian Genocide.

With Armenian communities besieged around the world by an unrepentant Turkey that blockades and fans the flames of war against the Armenians of Armenia and Karabakh, denies religious and human rights to the indigenous Armenians of present-day Turkey, and attempts to silence the Diaspora communities around the world, the lack of accountability for the Genocide continues to grossly impact the human rights of Armenians today.

Through the use of national and international courts and forums, ALC will seek a just resolution of the Armenian Genocide and to defend Artsakh’s right to independence. ALC will seek to coordinate the claims of victims of human rights abuses, identify potential claimants, investigate abuses, and gather the necessary evidence. “The ALC looks forward to working in concert with the Armenian community worldwide, to address the geo-political, territorial and macro-economic implications of the Republic of Turkey’s and others’ responsibility for the Armenian Genocide, including those related to the Western Armenian homeland, the payment of reparations to the Republic of Armenia and relevant Diasporan and other stakeholders, and the future of the Republic of Nagorno Karabakh, whose independent status and regional security today face challenges in the international arena, in large measure, due to the Armenian Genocide,” explained Kenneth Hachikian, Chairman.

Parallel to its international and national level legal activity, the Center will focus on justice-based solutions to the vast array of collective properties and other assets stolen or confiscated during the Genocide, including those involving churches, religious sites, foundations, schools, museums, artwork, artifacts, books, and other resources.
ALC will document the expropriation of Armenian national, community, and personal properties in an effort to find lasting solutions for peace and stability in the region based on justice and accountability.

“The ALC – in seeking redress for the Genocide in national and international legal arenas – is committed to securing justice for all stakeholders, including those continuing to experience injury from this crime. More broadly, as an organization committed to the global human rights movement, the ALC will also work to prevent future atrocities by helping to establish legal precedents and promoting policy-making frameworks that align with international law and global humanitarian values,” said Giro Manoyan, ALC Board of Directors member.

At the turn of the century, the territory of modern-day Turkey was home to a large, ancient, and vibrant indigenous Christian population, comprised of millions of Armenians, Greeks, Pontians, Assyrians, Chaldeans, and Syriacs, accounting for around 25% of the population. Today, these same communities account for less than 0.1% of Turkey’s population; individuals have been prosecuted for discussing or writing about the genocide committed against them, and Turkey coordinates closely with Azerbaijan to blockade Armenia and Artsakh, inhabited by the grandchildren of the men and women it sought to annihilate.

Decades later, it is clear that a model based on justice not genocide is desperately needed. The ALC will fill this void. Kate Nahapetian, an attorney with experience litigating class actions, who has advocated for Armenian Americans in Washington, DC for over ten years, will be ALC’s Executive Director. Ms. Nahapetian has worked previously for the Armenian National Committee of America, U.S. Department of Justice, then Senator Joseph Biden, and the Carnegie Endowment for International Peace. She received a J.D. with a focus on international and human rights law from the University of California at Berkeley School of Law, which was partly funded through the prestigious Paul & Daisy Soros Fellowship for New Americans. Ms. Nahapetian is a member of the California and New York bars, but not yet a member of the DC Bar. Her practice is currently limited to cases in federal court.

The ALC will be headquartered in Washington DC, but will have an international focus as will be appropriate for the various avenues that it seeks redress through. Board members are from both Armenia and the broad Diasporan community throughout the world.

There will also be a broadly representative Advisory Board consisting of experts in international law, human rights and in other fields relevant to the work of the ALC.

The ALC was started with a generous grant from the ANCA Endowment Fund and will be seeking community financial and moral support to expand its efforts.

Zoryan Institute: Reflections on the 25th Anniversary of the Independence of the Republic of Armenia