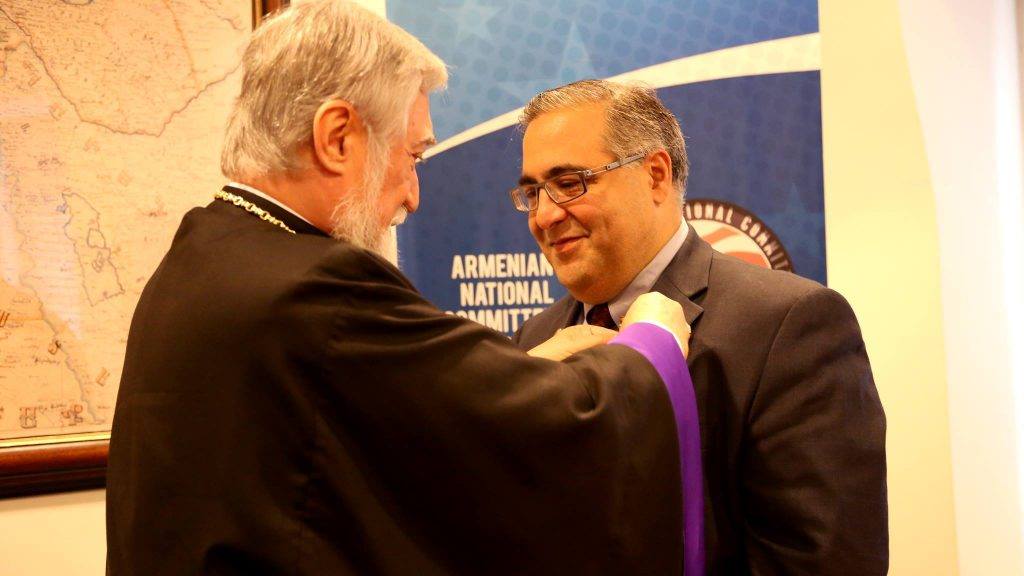 Aram I, Catholicos of the Great House of Cilicia, recognized the Armenian National Committee of America’s (ANCA) leadership in advancing the Armenian Cause, bestowing the Knight of Cilicia Medal on Executive Director Aram Hamparian, in honour of the ongoing and tireless work of the ANCA Board, staff, volunteers, and supporters across the United States.

“The advocacy, the enhancement, the promotion of the Armenian Cause has been a priority item on the agenda of the Catholicosate of Cilicia and its Prelacies,” explained His Holiness during a special visit to the ANCA offices on Sept. 28, noting that the work of the ANCA is “very close to our hearts, to our minds, and to our mission as a church.”

Bestowing the Knight of Cilicia medal, His Holiness explained, “in decorating Aram, I decorate all of you, your colleagues, your assistants, all of you, who together—I would like to underscore ‘together’—engage in this sacred mission. And I am sure, now that Aram becomes Knight, he will continue this mission with renewed engagement—with the spirit of a Knight of Cilicia.”

Hamparian humbly accepted the award on behalf of all who strive to realize the just national and democratic aspirations of the Armenian nation, including those who work in the public spotlight and, of course, the many more whose devotion and hard work remain largely unheralded.

The ANCA team was joined by Soorp Khatch Armenian Church Board of Trustees members Hrant Jamgochian and Jemma Simonian; local representatives of the Armenian Revolutionary Federation (ARF) and Armenian Relief Society (ARS); and community advocates, who engaged in a lively discussion with His Holiness on a broad range of topics, from the Catholicosate’s efforts to secure the return of its historic seat in Sis from Turkish authorities, to the challenges facing Armenian American communities in expanding Armenian language and cultural education and broadening community participation.