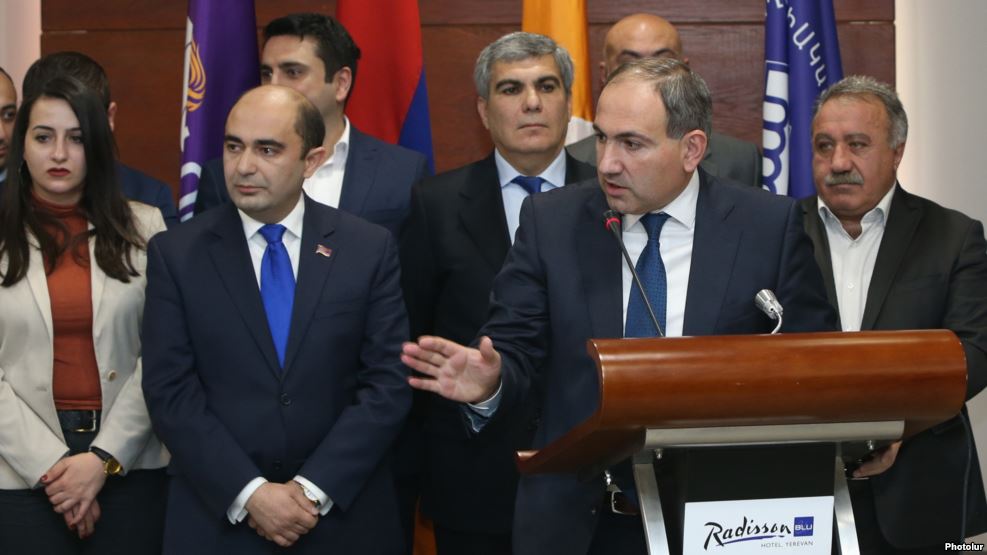 Armenia – Leaders of the opposition Civil Contract, Bright Armenia and Hanrapetutyun parties announce the creation of an electoral alliance in Yerevan, 12Dec2016.

(RFE/RL)- Three Armenian opposition parties critical of Russia formally agreed on Monday to set up an alliance that will challenge the government in parliamentary elections slated for April.

The Hanrapetutyun (Republic), Bright Armenia and Civil Contract parties said they will not only contest the election with a common list of candidates but also negotiate on their possible transformation into a single party.

The three groups have yet to decide who will top that list and thus be the still-unnamed bloc’s candidate for the post of Armenia’s prime minister. Civil Contract officially nominated its de facto leader Nikol Pashinian’s candidacy for the post earlier this year.

Pashinian made clear that his party is “not bound” by that decision.” “In this context, all discussions have to start from scratch,” he told reporters. “None of the parties intends to impose some decisions on its partners.”

“We are confident that we will reach a common denominator as a result of discussions,” he said after the chairmen of the three parties signed a memorandum on the creation of the electoral alliance.

The joint memorandum says that the three parties will strive for a “European model of the democratic, rule-of-law and social state” in Armenia and are strongly committed to the country’s “sovereignty.” But it does not elaborate on the new bloc’s foreign policy orientation.

The Hanrapetutyun leader, Aram Sarkisian, said at the signing ceremony that he and his opposition allies agree on “geopolitical” and “strategic” issues. He did not go into details.

Hanrapetutyun was a key opposition force in the 2000s but has kept a low profile in recent years and is not represented in Armenia’s parliament. Its leader served as prime minister in 1999-2000.

Both men downplayed the spat on Monday, with Pashinian saying that their disagreements have been “broadly overcome.”

“We were criticized not only for being intransigent but also for not uniting,” Marukian said for his part. “Having discussed and put all that aside, we are stepping onto a new and very important path.”