Over 35 Members of Congress Call for $100 Million U.S. Aid Package for Artsakh and Armenia 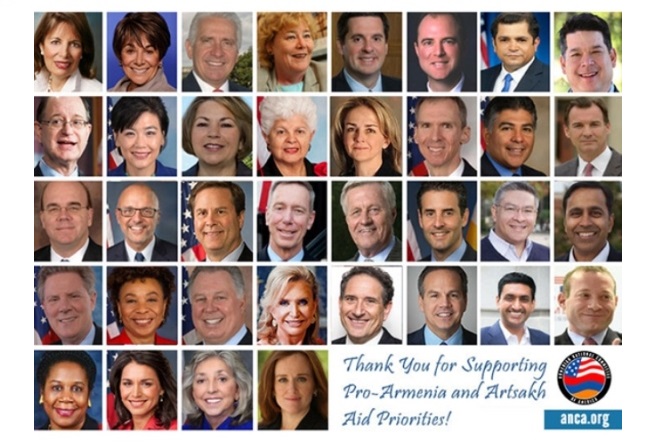 The dollar amounts and policy priorities requested by the Armenian Caucus, which annually spearheads bipartisan efforts to secure support for Armenian-related aid appropriation, are as follows:

Similar to Rep. Pallone’s Artsakh Travel and Communication Resolution (H.Res.190), the Congressional letter also calls on the State Department and USAID to lift any official or unofficial restrictions on U.S. travel, communication, or contacts with Artsakh government officials. In a recent interview with ANCA Government Affairs Director Raffi Karakashian, Rep. Pallone explained “it makes no sense to have this travel and communications restriction because we should try to have as much contact as possible with the people there so that there is an understanding of what the people of Artsakh and the government face.”

The full text of the Congressional letter is provided below.

Earlier in the day, senior House Foreign Affairs Committee member Brad Sherman (D-CA) pressed Secretary of State Mike Pompeo regarding pro-Armenia and Artsakh aid priorities. In two questions presented for the record, Rep. Sherman specifically inquired whether the State Department would support ongoing aid to the Republic of Artsakh for de-mining and rehabilitation services for the disabled. In the case of Armenia, Rep. Sherman highlighted the need for refugee resettlement funds.

The Secretary of State’s written responses generally arrive within the month.

In the wake of the Republic of Armenia’s remarkable Velvet Revolution, we are writing to thank the Subcommittee for its longstanding leadership in support of both Armenia and the Republic of Artsakh (Nagorno Karabakh). As you prepare the Fiscal Year 2020 State, Foreign Operations, and Related Programs Appropriations bill, we ask you to include the below provisions supporting a broad-based strategic upgrade of an U.S.-Armenia partnership based upon shared interests and common values.

Support for Armenian Democracy and Economic Independence:
Armenia’s newly-elected government has indicated its intentions to bolster civil society and democratic institutions. The United States Congress can aid this process by ensuring targeted assistance is given during this unprecedented transition. This is especially true with concern to the State and Foreign Operations Subcommittee, which has been generous in its support of Armenia and Artsakh in previous Congresses. Armenia is in a critical moment in which a meaningful increase in FY20 technical assistance on important priorities – including for freedom of the press, judicial independence, anti-corruption, and civil society purposes – will likely have an exponential positive impact on the country’s budding democratic institutions.

We ask the Subcommittee to support short-term increases in democracy aid over the next several fiscal years, parallel to our longer term commitment to Armenia’s aid-to-trade transition. Along with the aforementioned FY20 governance-related technical assistance, we would also encourage a focus on maximizing the effectiveness of US-Armenia Trade and Investment Framework Agreement (TIFA) Council meetings. These meetings can be utilized to strategically upgrade the U.S.-Armenia Economic Task Force, and to move forward on a modern Double Tax Treaty, Social Security Totalization Agreement, debt-for-reforestation swaps, and non-stop U.S. to Armenia commercial flights.

Of the funds appropriated by this Act, not less than $60,000,000 shall be made available for economic, governance, and rule of law assistance to Armenia. An increase in funding specifically to the Department of State’s Office of the Coordinator of U.S. Assistance to Europe and Eurasia and the U.S. Agency for International Development’s Bureau for Europe and Eurasia should also be made available for these purposes.

Of the funds appropriated by this Act, not less than $10,000,000 shall be made available for military assistance to Armenia.

Artsakh (Nagorno Karabakh)
Over the course of the past 21 years, this panel has invested wisely in a negotiated peace by providing funding for maternal health care and clean drinking water projects in Artsakh. Our aid program currently supports the HALO Trust’s landmine and unexploded ordnance clearance effort, which should be expanded geographically to include a greater number of at-risk communities. We also support additional Artsakh-based humanitarian priorities, including rehabilitation services, like those provided by the Lady Cox Rehabilitation Centre, as well as potential World Vision and Teach for America projects.

Azerbaijan
Azerbaijan has continued to inhibit the pro-peace mission of the OSCE Minsk Group in recent years. It continues to obstruct implementation of the bipartisan Royce-Engel accountability and peace proposals, which could finally bring an end to this lasting conflict. In light of this refusal to cease its threat of violence and the continuous arms build-up and escalating aggression against Armenia and Artsakh, we urge the Subcommittee to:

Regional Safe Haven for Middle East Refugees:
Over 25,000 individuals from Syria have sought safety in Armenia, which, despite being a small country, has received only modest levels of U.S. and international relief and resettlement assistance to accommodate this influx of refugees. Armenia has demonstrated its willingness to play a larger role as a regional safe haven for those fleeing persecution and death in the Middle East, but lacks the financial resources to offer the transition assistance needed by families fleeing violence.

We appreciate your consideration of these requests.