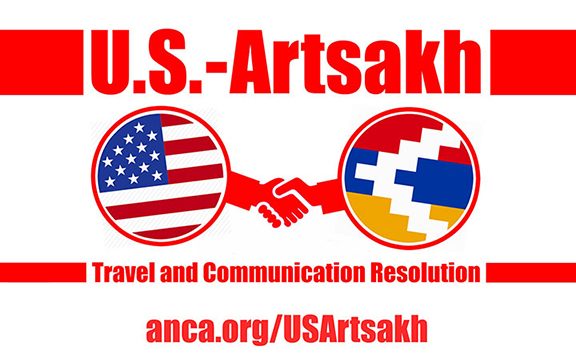 WASHINGTON—Congressional Armenian Caucus founding Co-Chair Frank Pallone (D-NJ) was joined Thursday by a dozen of his House colleagues in introducing the U.S.-Artsakh Travel and Communication Resolution, a bipartisan measure that aims to break down artificial barriers to unrestricted travel and open communication between the United States and Artsakh, reported the Armenian National Committee of America.

“We thank Congressman Pallone and his House colleagues for their bipartisan leadership in support of a durable and democratic peace between the republics of Artsakh and Azerbaijan,” said ANCA Chairman Raffi Hamparian. “Outdated and obsolete U.S. restrictions, adopted decades ago under pressure from Azerbaijan, prevent direct dialogue – artificially handcuffing our diplomats and blocking the path to peace.”

Hamparian called for broad bi-partisan support for the measure during a trip to the Republic of Artsakh airport.

Hamparian called for broad bi-partisan support for the measure during a trip to the Republic of Artsakh airport.

Similar to the resolution introduced in the previous Congress, the U.S. – Artsakh Travel and Communication Resolution praises the Artsakh Republic for having “developed democratic institutions, fostered a pluralist political system, and, over the past quarter-century, held parliamentary and presidential elections that have been rated as free and fair by international observers.” It also highlights Artsakh’s commitment to common-sense peace initiatives, first advocated by former House Foreign Affairs Committee Chairman Ed Royce (R-CA) and current Chairman Eliot Engel (D-NY), calling for the removal of snipers and heavy artillery from the Artsakh-Azerbaijan line of contact, the deployment of additional Organization for Security and Cooperation in Europe (OSCE) monitors, and the placement of gun-fire locator systems along the lines of contact. The measures, which have been embraced by Armenia, Artsakh, and the OSCE Minsk Group peace negotiators, have been thus far blocked by Azerbaijan.

The U.S.-Artsakh Travel and Communication Resolution notes that current State Department policies place “self-imposed restrictions on travel and communications between the United States and Artsakh, limiting oversight of United States taxpayer-funded assistance programs and discouraging the open dialogue and discourse that can contribute to a peaceful resolution of Artsakh-related status and security issues.”

The measure calls for a U.S. policy which would:
1. allow officials at all levels of the United States Government, including cabinet-level national security officials, general officers, and other executive branch officials, to travel to the Artsakh Republic and openly and directly communicate with their Artsakh counterparts;

2. encourage ongoing open communication, meetings, and other direct contacts between officials of Artsakh and the Executive and Legislative branches of the United States, state and local governments, and American civil society; and

3. seek the full and direct participation of the democratically-elected government of the Artsakh Republic in all OSCE and other negotiations regarding its future.

Pro-Artsakh advocates can encourage their U.S. Representative to support the measure.

Rep. Pallone is the most traveled U.S. Congressman to the Republic of Artsakh since its independence in 1991. He last visited the region in September, 2017, joined by Representative Tulsi Gabbard (D-HI) and former Representative David Valadao (R-CA). In remarks before the Artsakh Parliament, Rep. Pallone touted the Republic’s commitment to democracy, self-determination and economic development and discussed the Armenian Caucus’ on-going efforts to share Artsakh’s powerful story of peace and freedom with Congress and the Administration. “Whatever we do, we will always insist that Artsakh has to be Armenian and it has to be able to exercise its right to self-determination,” Rep. Pallone told Artsakh Parliamentarians.

Rep. Pallone is currently serving his 16th term in Congress, representing New Jersey’s sixth Congressional District, which covers most of Middlesex County, as well as the Bayshore and oceanfront areas of Monmouth County. He is the Chairman of the House Energy and Commerce Committee, which has jurisdiction over issues pertaining to energy, environment, health care, commerce, and telecommunications.

As founder and a Democratic Co-Chair of the Congressional Armenian Caucus, Rep. Pallone has been a leading voice on Armenian American issues since 1988. He has been a consistent cosponsor of Armenian Genocide legislation. Working with his colleagues, he has initiated calls for expanded U.S. assistance to Armenia and Artsakh and spoken out about the plight of Armenians and other Christians in the Middle East. He has been a perennial participant at Armenian American community events, including the Armenian Genocide Observance at Times Square.