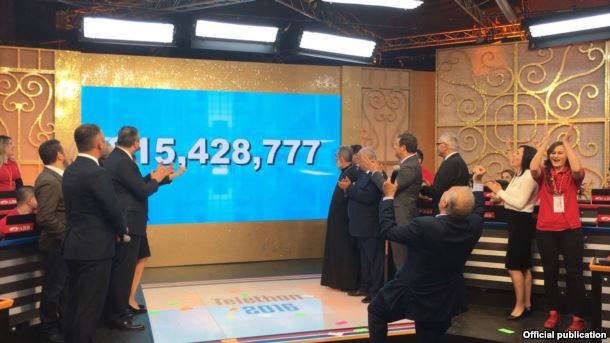 (RFE/RL)- The Hayastan All-Armenian Fund has raised almost $15.5 million in donations during its annual telethon broadcast from Los Angeles on American Thanksgiving Day on November 24. It raised $10.4 million during last year’s televised fundraiser.

The funds will be mostly spent on the reconstruction of war-ravaged communities in Nagorno-Karabakh and other local infrastructure projects.

Nearly half of the sum was contributed by several ethnic Armenian businessmen from the United States, Russia and Armenia. Armenian-American entrepreneur Antranig Badghassarian made the single largest contribution: $ 5million. He was followed by Russian-Armenian tycoon Samvel Karapetian, who donated $1 million

In a statement, the Hayastan fund said most proceeds from the telethon will be channeled into Karabakh. It said they will finance the reconstruction of several local communities that were seriously damaged by last April’s heavy fighting between Karabakh Armenian and Azerbaijani forces.

The Hayastan fund said the money will also be used for boosting Karabakh’s “emergency and disaster preparedness” and building homes for local families with multiple children.

“In addition to these initiatives, donor-specified projects as well as projects within the framework of the fund’s core development programs will continue to be implemented in Armenia and Artsakh (Karabakh),” added the statement.

Hayastan has implemented over $240 million worth of infrastructure projects in Armenia and Nagorno-Karabakh since its establishment in 1992. The fund’s current Board of Trustees is headed by President Serzh Sarkisian and comprises other senior Armenian state officials, Catholicos Garegin II as well as prominent representatives of Armenian communities around the world.

In particular, the fund has partly financed the ongoing construction of a second highway connecting Nagorno-Karabakh to Armenia. Work on the 116-kilometer-long road link began in 2011 and is now nearing completion.