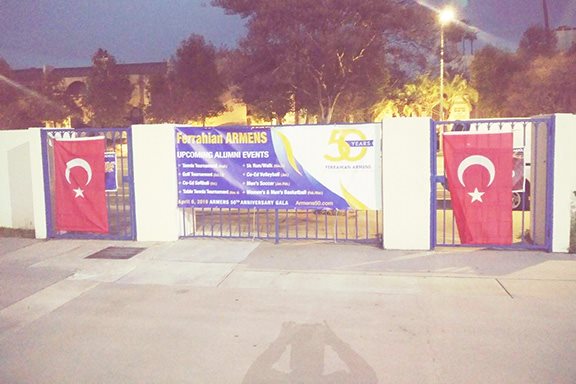 Turkish flags were hung on the premises of the Holy Martyrs Ferrahian Armenian High School on Jan. 29.

A dozen flags were found at Holy Martyrs Ferrahian Armenian High School at 5300 White Oak Ave. in Encino and 14 on the exterior fencing at AGBU Manoogian-Demirdjian School in the 6844 of Oakdale Ave. in Canoga Park, according to the schools’  principals.

A man in dark clothing and wearing a man mask can be seen going over the perimeter fence of the Encino school in security camera video, said principal Sossi Shanlian.

The hanging of flags at Holy Martyrs were being investigated as a possible hate crime.

Underscoring the seriousness with which the case is being taken, three LAPD captains, two Los Angeles city council members, and the City Attorney joined school officials and representitives of the Armenian National Committee of America at an evening news briefing, denouncing the hanging of the flags as clearly intended to be provocative and “hateful.”

Because the hanging of the flags outside the AGBU Manoogian-Demirdjian  campus did not involve criminal trespass, it was being investigated as a possible “hate incident,” according to LAPD Officer Jeff Lee.

The school in Canoga also recorded security video, but it did not show the person as clearly as at the Encino school.