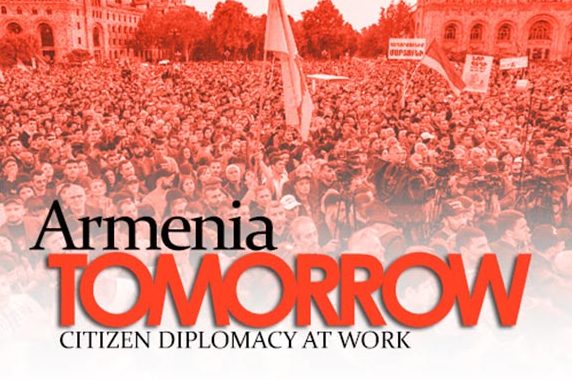 More than a dozen political scientists from around the world and high-level activists from Armenia will gather at USC on Sunday, May 20, at 1 pm to discuss ARMENIA TOMORROW. Armenia Tomorrow will be held at 1 p.m. on Sunday at USC

There are so many questions that Armenians and non-Armenians are asking after Prime Minister Serzh Sargsyan stepped down, and former Member of Parliament Nikol Pashinian assumed the post.  What changes can and must be made quickly in order to bring about the transformation that the leaders of the protest promised? How will street politics be translated into policy formation and implementation?

“What people in and out of Armenia are calling a revolution was both impossible and inevitable, given the way in which Armenia’s civic institutions and economy were in decline,” observed Salpi Ghazarian, director of the USC Institute of Armenian Studies. “The Institute is sponsoring this Sunday-afternoon event with the express purpose of helping us all understand what happens to countries that undergo such massive transformation in such a short period of time.”

Among those who have confirmed their participation are Armen Grigoryan, one of the leaders of the protest movement and a high-level appointee in the new government, David Usupashvili, who headed Georgia’s Parliament during the years after the Rose Revolution, Professor Fayez Hammad of Jordan, who teaches Middle East politics at the USC, and Professor Anna Ohanyan, who will speak about the challenges of state formation.

Also participating will be Professor Katy Pearce, on the role of social media in these protests and the governing that will follow, and Dr. Irina Ghaplanyan on the socio-economic and political conditions that enabled such mass protests. Attorney and former judge Edward Mouradian will address critical needs in judicial reform. Journalists Emil Sanamyan and Grigor Atanesian will explore what comes next for the region, and for a society not accustomed to an absence of an opposition. Political economists Daron Açemoglu (MIT) and Bedros Terzian (Petrostrategies, France) will talk about the economic challenges of an energy-dependent country attempting to move from a kleptocracy to an open playing field.

“This is a great time for Armenia and Armenians. The world is calling this peaceful yet fundamental transition of power unique.  Armenians in and out of Armenia are excited and inspired.  And yet, there is so much that needs to be explored and analyzed in order for those who want to engage in this massive change to do so in a practical, useful way,” she continued.

Who are the leaders of the protest movement who are now becoming Armenia’s government leaders? What is their capacity? How deep is the commitment to democratization? How will the intermediate institutions in Armenia – the media, the church, the owners and workers of major businesses, non-governmental organizations, advocacy organizations, health care groups – reform and evolve?

There are more questions. If the recent events were not like the Arab Spring, and if this wasn’t a Color Revolution like in Georgia, what was this political upheaval that happened so unexpectedly and completely in Armenia?

“We will clearly be discussing these and other questions for years to come, but this is a good place to start,” said Ghazarian. The public is invited to come to this free event at USC, or watch the livestream at Armenian.usc.edu.

Parking is available in Parking Lot X, on Figueroa at McCarthy Way