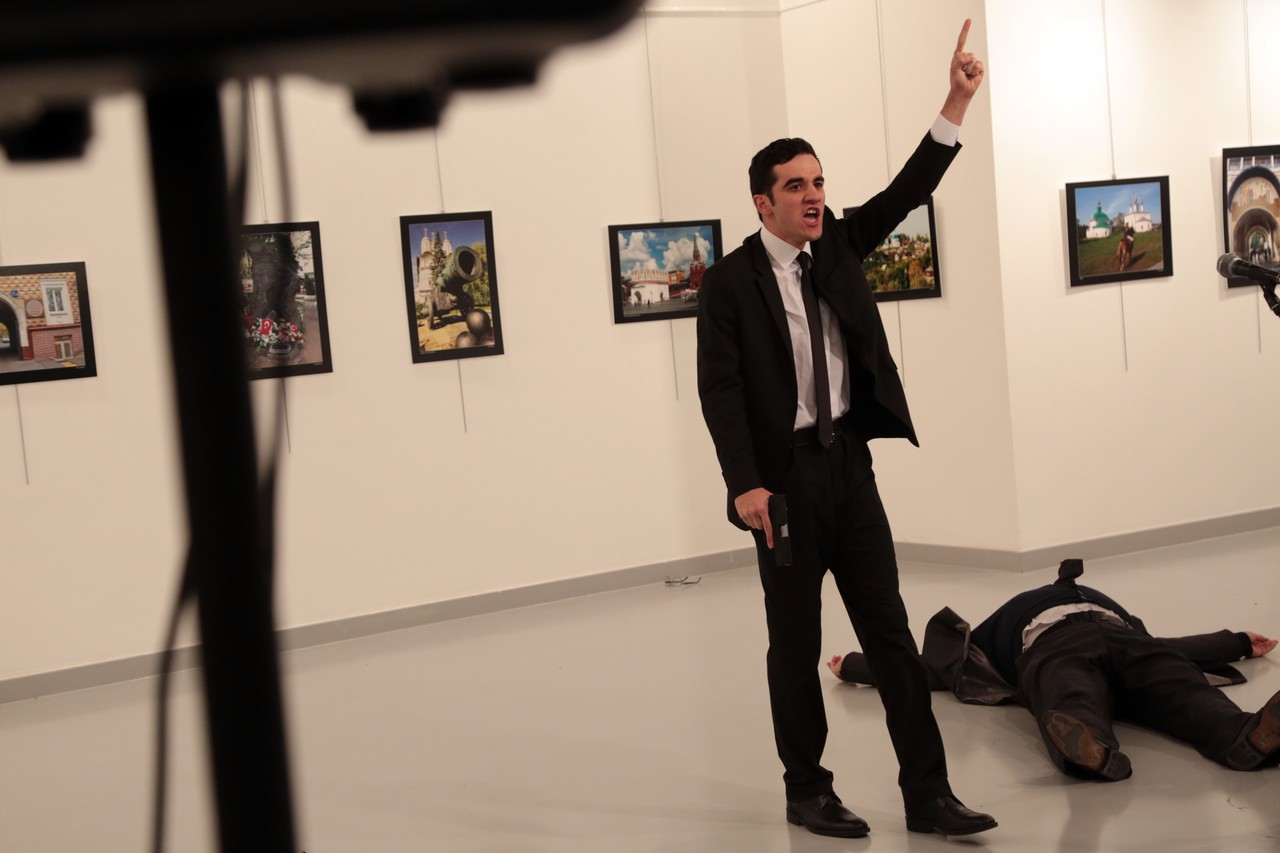 The man on the right, identified as the shooter, stands over the body of Ambassador Andrey Karlov (Photo: Getty Images)

ANKARA (Hurriyet Daily News)—Russia’s ambassador to Turkey, Andrey Karlov, was shot dead at an art exhibition in the Turkish capital of Ankara on Dec. 19, Russian Foreign Ministry has confirmed.

Karlov was shot by a gun while making a speech at a photography exhibition in the Turkish capital, the Russian embassy said, adding that it believed that it was a radical Islamist attack.

Meanwhile, private broadcaster NTV said three other persons were also injured in the attack. The channel also reported that the attacker was shot dead later in a police operation at the scene.

Hürriyet Ankara representative Deniz Zeyrek said the attacker first shot into the air and later shot the envoy in the back.

He shot the envoy for the second time after the scene was evacuated. It has also been reported that the attacker entered the scene by showing a police identity and wearing a suit.

The attacker reportedly shouted “Don’t forget Aleppo! Don’t forget Syria! As long as our brothers are not safe, you will not enjoy safety” according to a footage released on Dutch website nos.nl.

“Whoever has a share in this oppression will pay for it one-by-one,” he added.

“Only death will take me away from here.” He also recited “God is great” before talking in Turkish.

Meanwhile, Kremlin said that President Vladimir Putin was studying a report on the attack.

Russian Foreign Ministry also said the Russian side was in contact with Turkish authorities about the attack.

The exhibition was held by the embassy at a cultural center in central Ankara and was announced one week earlier.

A private guard does not accompany Karlov in such public occasions.

The attack comes one day before Turkish Foreign Minister Mevlüt Çavuşoğlu heads to Moscow for talks on Syria with his Russian and Iranian counterparts, Sergei Lavrov and Javad Zarif, respectively.

Çavuşoğlu was on the plane to Moscow during the time of the attack.

Karlov, who started his career as a diplomat in 1976, worked extensively in North Korea over three decades, before moving to Ankara in 2007, according to a biography on the Russian Embassy’s website. He became ambassador in July 2013.

“There will be no fresh cooling in relations between Moscow and Ankara, no matter how strongly our strategic opponents in Ankara and the West want this,” said Leonid Slutsky, who heads the international affairs committee of the Russian Duma, according to the BBC.

“This is not going to happen. There are differences between us. It’s a horrendous tragedy, but relations between our states will not suffer,” Slutsky said.

Meanwhile, the attack drew condemnations from both the U.S. and the U.K.

“I condemn in the strongest terms the heinous attack on Ambassador Karlov tonight,” the U.S. Embassy tweeted quoting Ambassador John Bass after the attack.

“We have seen reports that the Russian Ambassador to Turkey Andrey Karlov and others have been attacked by a gunman in #Ankara. We condemn this act of violence, whatever its source. Our thoughts and prayers are with the victims and their families,” Kirby tweeted.