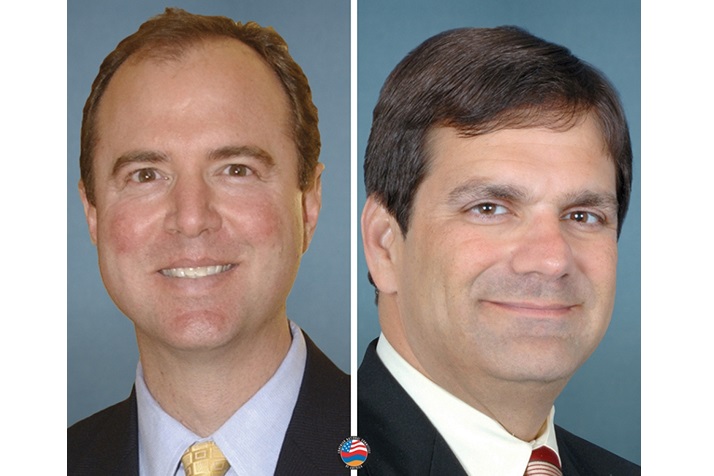 WASHINGTON—On the eve of the Capitol Hill Armenian Genocide Observance, Congressmen Adam Schiff (D-CA) and Gus Bilirakis (R-FL) on Monday were joined by more than 70 of their U.S. House colleagues in introducing a new Armenian Genocide Resolution aimed at establishing, as a matter of U.S. policy, 1) the rejection of Armenian Genocide denial, 2) ongoing official U.S. government recognition and remembrance of this crime, and 3) the importance of education about the Armenian Genocide in preventing modern-day atrocities, reported the Armenian National Committee of America (ANCA).

“All who oppose genocide welcome today’s launch of legislation locking-in U.S. recognition of the Armenian Genocide and – once and for all – locking-out Turkish denials of this crime,” said ANCA Executive Director Aram Hamparian. “This bipartisan measure – spearheaded by Representatives Adam Schiff and Gus Bilirakis – also permanently locks down – as official U.S. policy – that future generations should be educated about the facts of this crime, America’s noble relief efforts for its victims, and – most urgently – the relevance of the Armenian Genocide to modern-day crimes against humanity.”

Rep. Schiff highlighted the genocide prevention role of the legislation. “Over 100 years ago, the Ottoman Empire undertook a brutal campaign of murder, rape, and displacement against the Armenian people that took the lives of 1.5 million men, women, and children in the first genocide of the 20th century,” said Rep. Schiff. “Genocide is not a relic of the past, but an ever present threat. Its denial is not only a continuing injury to the survivors, but makes its repetition against another people more likely. It is therefore all the more pressing that the Congress recognize the historical fact of the Armenian Genocide and make clear that we will never be an accomplice to denial.”

Republican lead sponsor Gus Bilirakis (R-FL), explained, “Genocide must not be denied. It must be acknowledged for what it is—a scourge on humanity. Official recognition of the Armenian Genocide would represent a courageous new chapter in American foreign policy. With the bold leadership of the current Administration, it is time for the United States to take a stand against Turkish genocide denial.”

Additional original cosponsors may be added before the end of the day and will be updated on the ANCA website at: https://anca.org/ag-cosponsors/

In a “Dear Colleague” letter sent to U.S. Representatives by Congressmen Schiff and Bilirakis in early April, Congressmen Schiff and Bilirakis took on Ankara’s anticipated opposition to an honest U.S. remembrance of the Armenian Genocide head-on, writing: “Let us be direct. Genocide recognition is opposed by a single entity: The government of Turkey. For decades, Turkey has deployed threats and an intense campaign of lobbying to intimidate the Congress from recognizing the genocide carried out by the Ottoman Empire.” They went on to argue that: “Turkey’s denial of the Armenian Genocide is also a source of continued regional tension, undermining the foundations of a durable peace that would be in the best interests of the United States and our national security. Official recognition of the Armenian Genocide can help open a new chapter in United States foreign policy. It is time for the United States to take a stand for the truth, and against genocide denial.”

The Armenian Genocide Resolution notes that the U.S. has, as early as 1951, officially recognized the Armenian Genocide through a filing with the International Court of Justice, followed by House legislation adopted in 1975, and 1984 and President Ronald Reagan’s Proclamation in 1984.

The resolution resolves that it is the policy of the United States to:

The full Text of the Resolution is provided below.

Affirming the United States record on the Armenian Genocide.
IN THE HOUSE OF REPRESENTATIVES

Mr. SCHIFF submitted the following resolution; which was referred to the
Committee on__________

Affirming the United States record on the Armenian Genocide.

Whereas the United States has a proud history of recognizing and condemning the Armenian Genocide, the killing of 1.5 million Armenians by the Ottoman Empire from 1915 to 1923, and providing relief to the survivors of the campaign of genocide against Armenians, Greeks, Assyrians, Chaldeans, Syriacs, Arameans, Maronites, and other Christians;

Whereas the Honorable Henry Morgenthau, United States Ambassador to the Ottoman Empire from 1913 to 1916, organized and led protests by officials of many countries against what he described as the empire’s ‘‘campaign of race extermination’’, and was instructed on July 16, 1915, by United States Secretary of State Robert Lansing that the ‘‘Department approves your procedure . . . to stop Armenian persecution’’;

Whereas Raphael Lemkin, who coined the term ‘‘genocide’’ in 1944, and who was the earliest proponent of the United Nations Convention on the Prevention and Punishment of Genocide, invoked the Armenian case as a definitive example of genocide in the 20th century;

Whereas as displayed in the United States Holocaust Memorial Museum, Adolf Hitler, on ordering his military commanders to attack Poland without provocation in 1939, dismissed objections by saying ‘‘[w]ho, after all, speaks today of the annihilation of the Armenians?’’, setting the stage for the Holocaust;

Whereas the United States has officially recognized the Armenian Genocide, through the United States Government’s May 28, 1951, written statement to the International Court of Justice regarding the Convention on the Prevention and Punishment of the Crime of Genocide, through President Ronald Reagan’s Proclamation No. 4838 on April 22, 1981, and by House Joint Resolution 148, adopted on April 8, 1975, and House Joint Resolution 247, adopted on September 10, 1984; and

Whereas the Elie Wiesel Genocide and Atrocities Prevention Act of 2018 (Public Law 115–441) establishes that atrocities prevention represents a United States national interest, and affirms that it is the policy of the United States to pursue a United States Government-wide strategy to identify, prevent, and respond to the risk of atrocities by ‘‘strengthening diplomatic response and the effective use of foreign assistance to support appropriate transitional justice measures, including criminal accountability, for past atrocities’’: Now, therefore, be it

Resolved, That it is the sense of the House of Representatives that it is the policy of the United States to—

(1) commemorate the Armenian Genocide through official recognition and remembrance;

(2) reject efforts to enlist, engage, or otherwise associate the United States Government with denial of the Armenian Genocide or any other genocide; and