The Future for Global Armenians is now, open letter says 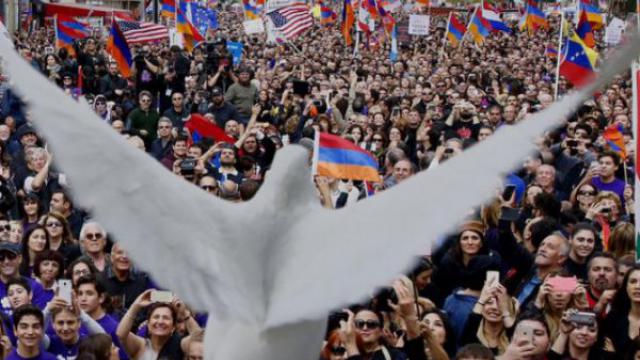 [:en]The global Armenian community must do more to deliver a successful future for the nation that is economically and socially secure, according to an open letter published today and signed by a group of high profile Armenians around the world.

The letter was issued on the occasion of the 110th anniversary celebrations of the Armenian General Benevolent Union (AGBU) in New York. The signatories include Ruben Vardanyan, Noubar Afeyan, Vartan Gregorian, Charles Aznavour, Lord Ara Darzi, Ambassador Edward Djerejian, the Honorable Dickran Tevrizian, and Samvel Karapetyan, as well as a number of other supporters. Beyond noting the major milestone represented by this anniversary, the letter highlights the critical challenges ahead and the need for unprecedented action and commitment from Armenia and Armenian diaspora communities. The open letter was published in The New York Times, based in the U.S., and the Haiastani Hanrapetuthiun, based in Armenia.

“Armenians around the world must work together to ensure that our Armenia can reach its full potential as a world-leading nation,” said Noubar Afeyan, member of the board of the IDeA Foundation of Armenia and of the AGBU. “This will require an unprecedented commitment from the global Armenian community. We need to invest time, expertise, relationships and money to create and champion initiatives that will drive Armenia into the future it deserves. Delaying action and investment will mean that a vulnerable state remains at risk – and the alternative, remaining unengaged, is indefensible.”

“Many great civilizations in the history of humanity have disappeared into oblivion. Each one of them represents a permanent loss of culture, language and religion for all humanity. We have to keep this in mind as it could happen to Armenians as well,” said international singer and diplomat Charles Aznavour. “This is the goal of our enemies whoever they may be, aided by those who make a profit or choose to turn a blind eye. However the greatest threat comes from within us, and it is through inaction.”

“Armenia needs support from its worldwide community if it is to succeed. While a number of initiatives are underway by various groups that demonstrate a record of success, delivering programs that have impact on the people of Armenia and the Armenian diaspora, there is still a great deal of work left to be done,” said, Ruben Vardanyan, member of the board of the IDeA Foundation of Armenia and of the AGBU. “We ask all Armenians to join with us to advance our country’s culture and infrastructure, and propel Armenia into a successful and sustainable future.”

The full text of the letter follows below.

This weekend, the Armenian General Benevolent Union (AGBU), one of the oldest non-profit organizations in the U.S. and the world’s largest Armenian organization, celebrates its 110th anniversary in New York City. Underscoring this milestone is the extraordinary opportunity to reshape the future of Armenia, and to reflect on how every one of us can contribute toward a stronger Armenia tomorrow.

Over the years, AGBU, an organization established to address the challenges facing Armenians both in the homeland and the Diaspora, has fostered socioeconomic initiatives and addressed educational, cultural and humanitarian needs worldwide. We congratulate AGBU on its unparalleled role in preserving the Armenian identity throughout a vast network of Diasporan communities.

Forcibly displaced from their ancestral homeland and dispersed, Armenians living across the world have made major contributions toward advancing their adoptive countries. Long ago, we learned to adapt to our host countries, to be loyal citizens, even as we maintain our common historic identity, language and, through the leadership of the Armenian Church, our Christian faith.

We salute the longstanding contributions of all those individuals and organizations, such as the Armenian Missionary Association, the Armenian Relief Society, the Gulbenkian Foundation and the many others, who have contributed to sustaining the Diaspora through charitable projects.

We also recognize the enormous contributions made toward Armenia’s development since its independence by philanthropists Kirk Kerkorian and AGBU’s Louise Manoogian Simone, among others. Their pioneering work since the early 1990s has helped to build vital institutions and infrastructure.

A quarter century after gaining its independence from the former Soviet Union, the state of the young Republic of Armenia remains vulnerable, as does the state of the Armenian identity globally. Today, we stand at a historic crossroads. While we are certainly aware of our many challenges, we equally recognize the unprecedented opportunity ahead.

An opportunity for the Armenian world to pivot toward a future of prosperity, to transform the post-Soviet Armenian Republic into a vibrant, modern, secure, peaceful and progressive homeland for a global nation.

An opportunity for Armenians not only to have survived Genocide, but to reconstitute and thrive.

An opportunity for Armenia to secure long-lasting social and economic improvement, for our citizens today as well as for our children and the future of our global nation.

Moving forward, we must have a much higher level of sustained commitment from the Armenian community worldwide, whether through social impact or commercial investment, innovation, expertise or active involvement. In the long run, we must aspire to bring Armenia to no less than the same global standards as those of the countries in which many of us in the Diaspora live.

Beyond individual efforts, we want to instigate an unprecedented spirit of partnership and coordination among all Armenian organizations and individuals. We call on all Armenians to engage in pioneering and long-term investment to restore the social, economic, cultural and technological strengths of the nation, with Armenia at its core. At the same time, we urge the government of Armenia to respond to this clarion call by adopting new development strategies based on inclusiveness and collective action.

Individuals, as well as public and private organizations dedicated to the advancement of Armenia, must come together, pool their resources and collaborate to deliver a better tomorrow for the Armenian people. We believe that in order to succeed, we cannot operate in isolation as Armenian citizens or as Diaspora Armenians, but rather together as a united force.

We, the undersigned, are launching this effort with a long-term commitment toward collectively advancing the nation. We welcome all those who can join.