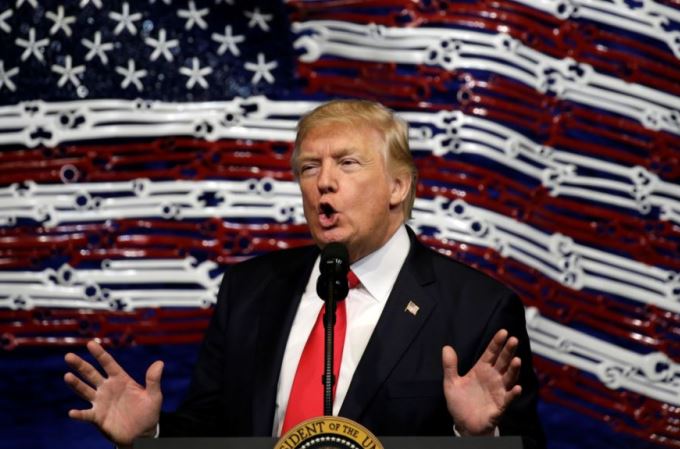 Echoing statements made by his predecessors, U.S. President Donald Trump declined to describe the 1915 mass killings of Armenians in Ottoman Turkey as genocide on Monday, speaking instead of “one of the worst mass atrocities of the 20th century.”

“Today, we remember and honor the memory of those who suffered during the Meds Yeghern, one of the worst mass atrocities of the 20th century,” read the written statement issued on the 102nd anniversary of the Armenian genocide.

“Beginning in 1915, one and a half million Armenians were deported, massacred, or marched to their deaths in the final years of the Ottoman Empire,” it said. “I join the Armenian community in America and around the world in mourning the loss of innocent lives and the suffering endured by so many.”

Trump also paid tribute to Armenian Americans’ “indelible contributions” to the United States and said their ancestors had established “one of the great civilizations of antiquity.”

Trump avoided using the politically sensitive word “genocide” despite an appeal from more than 80 members of the U.S. House of Representatives. The latter signed a joint letter on April 10 urging him to “properly commemorate” the Armenian genocide anniversary.

The leading Armenian-American advocacy groups were quick to denounce Trump’s apparent desire not to alienate Turkey, a longtime U.S. ally. The Armenian Assembly of America branded his statement as “capitulation to Turkish authoritarianism.”

“President Trump’s statement today demonstrates the need for the FBI and the Congressional Intelligence Committees to do thorough investigations of all the evidence on surreptitious Turkish influence on the U.S. government,” the Assembly co-chairs, Anthony Barsamian and Van Krikorian, said in a joint statement.

Erdogan is scheduled to visit Washington and meet with Trump in the White House on May 16.

Obama promised to recognize the Armenian genocide when he first ran for president. But he backtracked on that pledge after getting elected in 2008.

Trump did not publicly comment on the Armenian genocide issue or seek to woo the Armenian community in the United States otherwise during the 2016 presidential race.