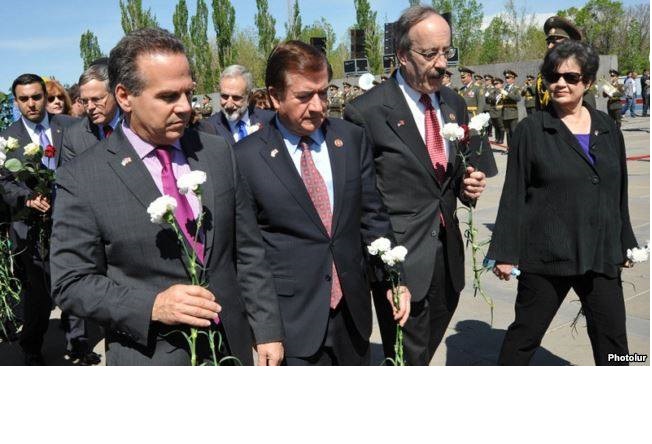 (RFE/RL)- More than 80 members of the U.S. House of Representatives have called on U.S. President Donald Trump to officially recognize the 1915 Armenian genocide in Ottoman Turkey.

In a joint letter circulated on Monday, they said Trump should “properly commemorate” on April 24 the 102nd anniversary of the start of mass killings and deportations of Armenians ordered by the Ottoman regime of the “Young Turks.”

“Through recognition of the Armenian Genocide we pay tribute to the perseverance and determination of those who survived, as well as to the Americans of Armenian descent who have helped strengthen our country,” reads the letter signed by 84 lawmakers.

“It is our duty to honor those contributions with an honest statement of history recognizing the massacre of 1.5 million Armenians as the 20th century’s first genocide. By commemorating the Armenian Genocide, we renew our commitment to prevent future atrocities,” it adds.

In recent decades, U.S. presidents have issued statements on April 24 commemorating the World War One-era slaughter of some 1.5 Armenian subjects of the Ottoman Empire. But only one of them, Ronald Reagan, used the word “genocide” while in office.

Trump’s predecessor, Barack Obama, promised to recognize the genocide when he ran for president. But after getting elected in 2008 he backtracked on that pledge for fear of antagonizing Turkey, a U.S. ally which vehemently denies that the Armenian massacres constituted genocide. In an April 2016 statement, Obama referred instead to “the first mass atrocity of the 20th century.”

Trump did not publicly comment on the Armenian Genocide issue or seek to woo the influential Armenian community in the United States otherwise during the 2016 presidential race.

The overwhelming majority of the U.S. lawmakers that signed the letter to Trump are Democrats mostly representing California and other U.S. states with sizable ethnic Armenian populations. The letter was also signed by over a dozen Republicans, including Ed Royce, the chairman of the Hose Foreign Affairs Committee and Devin Nunes, the chairman of the House Intelligence Committee. Both men represent California constituencies.

The signatories do not include Paul Ryan, the Republican speaker of the House of Representatives who has backed draft congressional resolutions on the Armenian Genocide in the past. Ryan was endorsed by the Armenian National Committee of America (ANCA) ahead of the November 2016 congressional elections.

Both the ANCA and the other major Armenian-American lobby group, the Armenian Assembly of America, welcomed the joint appeal by the 84 House members. They also voiced strong support for yet another genocide resolution that was introduced by several pro-Armenian congressmen late last month.

U.S. Vice President Mike Pence opposed a similar resolution in March 2010 when he was a Republican member of the House Foreign Affairs Committee. While acknowledging that the 1915 Armenian massacres amounted to genocide, Pence said that the U.S. should not affirm that because “Turkey is a strategic partner in our efforts in Afghanistan and Iraq.” Pence threatened to reconsider his stance on the issue just three months later, however, amid a sharp deterioration of Turkey’s relations with Israel.

Congressional Letter to President Trump Regarding the Armenian Genocide

Dear Mr. President,
We are writing to encourage you to properly commemorate the Armenian Genocide on April 24th.

In leading an honest and accurate American remembrance of this known case of genocide, you will stand with President Reagan, who recognized the Armenian Genocide in 1981, and the Eisenhower Administration, which did the same in a 1951 submission to the International Court of Justice. The House of Representatives has also commemorated the Armenian Genocide, through HJR148 in 1975 and HJR247 in 1984.

Armenia remains deeply committed to expanding the bonds of friendship that have long connected the American and Armenian peoples. Among the proudest chapters in our shared history is America’s remarkable record of protesting the Genocide and in caring for the survivors of this crime. The United States Ambassador to the Ottoman Empire in 1915, Henry Morgenthau, helped to chronicle the brutal extermination of the Armenian people through a campaign of mass murder and violent expulsion.

In the years after the genocide, Ambassador Morgenthau and other concerned Americans launched the Near East Relief, a Congressionally chartered humanitarian organization, which raised $116 million (over $2.5 billion in 2017 dollars) to aid the victims of the Ottoman Empire’s mass murder of millions of Armenians, Assyrians, Chaldeans, Greeks, Pontians, Syriacs, and other persecuted peoples. The generosity of the American people saved countless lives and helped to ensure the continued survival of the Armenian culture.

The Armenian Genocide continues to stand as an important reminder that crimes against humanity must not go without recognition and condemnation. Through recognition of the Armenian Genocide we pay tribute to the perseverance and determination of those who survived, as well as to the Americans of Armenian descent who have helped strengthen our country. It is our duty to honor those contributions with an honest statement of history recognizing the massacre of 1.5 million Armenians as the 20th century’s first genocide. By commemorating the Armenian Genocide, we renew our commitment to prevent future atrocities.

In that spirit of honoring the victims and redoubling our commitment to prevent genocide, we ask you to appropriately mark April 24th as a day of American remembrance of the Armenian Genocide.

Thank you for taking our views into consideration.