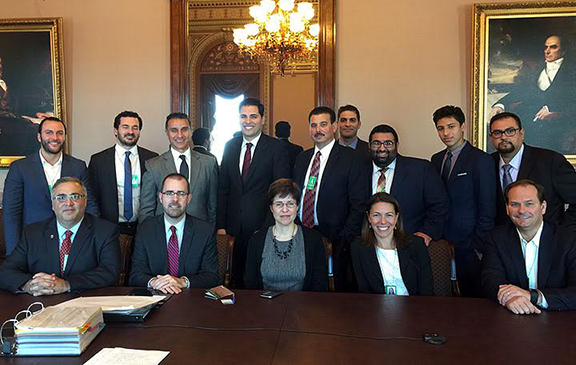 [:en]The Armenian National Committee of America (ANCA) joined in a White House briefing on Oct. 25, between senior Obama Administration officials and leaders of the Assyrian/Chaldean/Syriac, Armenian, and Antiochian communities to discuss the security of Christians in the Middle East.

The Administration was represented by Special Assistant to President Obama, Melissa Rogers; State Department Special Advisor for Religious Minorities, Knox Thames, and; senior officials of the National Security Council. ANCA Executive Director Aram Hamparian took part in the briefing along with Steve Oshana, Executive Director of A Demand for Action, and senior leaders of organizations representing Americans of Antiochan and Assyrian/Chaldean/Syriac heritage, including Mark Arabo of the Minority Humanitarian Foundation.

Among the consensus priorities of the visiting delegation were protecting Christian and other at-risk populations from ongoing armed attacks, supporting refugees and internally displaced persons, closing gaps in the delivery of international humanitarian aid to highly vulnerable groups, standing up sustainable and secure safe havens for persecuted minorities, including in the form of a Nineveh Plains Province, and, more broadly, ensuring that ethnic, religious, and cultural diversity contributes to the future stability and prosperity of the region. The ANCA has long advocated for Armenia as a safe sanctuary and secure long-term home for Armenians and other Christians and oppressed groups fleeing violence in the Middle East.

“As Armenian-Americans, we were pleased, once again, to join with our Christian allies in delivering a unified message to our White House about the concrete steps that our country can and must take to address the urgent crisis facing our sisters and brothers in Syria, Iraq, and across the region,” said Hamparian. “Armenia—which has already taken in over 20,000 refugees fleeing violence in the Middle East – can, with materially increased U.S. and international support, serve as a safe haven and secure long-term home for the region’s Christians, Yezidis, and other at-risk minority populations.”

Commenting on ADFA’s social media following the meeting, Oshana noted: “In these moments, when our people are facing serious existential threats, the coalitions we build are what allow us to make progress in the face of even the most difficult of circumstances… I’m proud that today we were able to bring together a coalition of Assyrian/Chaldean/Syriac, Armenian, and Antiochian Americans to advocate on behalf of victims of Genocide. To walk into the White House with this kind of coalition was uplifting and our continued engagement with the Obama administration during these difficult times is as important as ever.”[:]