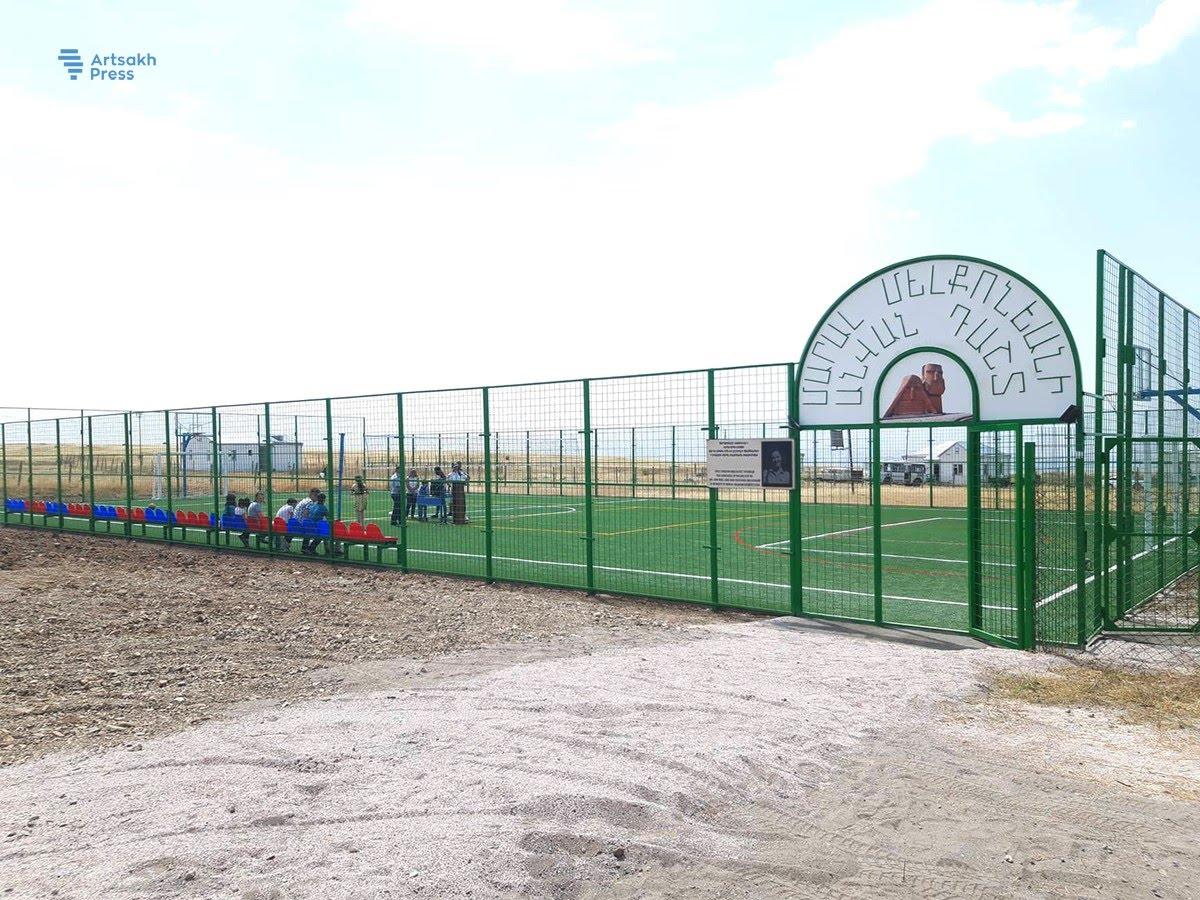 A wide-angle view of the sports facility (Photo: Artsakhpress.am)

ARTSAKH, “Armenian weekly”– Villagers, officials and diasporan sponsors joined together last week to mark another stage in developing the border village of Arajamugh, with the opening of a new outdoors sports facility.

The sports complex will serve the youth of the village and surrounding areas in the liberated territories of southern Artsakh. Home to dozens of school-age children, Arajamugh is a young, growing village that presents the need for sporting and recreational activities that can instill local pride and bolster inhabitants’ presence on these lands.

The facility was built through the efforts of the Armenian Cultural Association of America’s (ACAA) Artsakh Fund, which in recent years has worked to expand Arajamugh into a full-fledged village. In this case, the Fund relied on the generous sponsorship of Ara and Haygo Melkonian of Darnestown, Maryland. The Melkonians dedicated the facility in memory of their late daughter Maral, who had spent considerable time in Artsakh as an aid worker.

The day began as villagers welcomed the Melkonians and other guests with a traditional offering of bread and salt. This was followed by a ribbon-cutting ceremony, as well as a brief speaking program. Opening the program was Nver Grigoryan, Deputy Head of the Hadrut District Administration. Grigoryan recounted that the Hadrut region (formerly known as Dizak) has produced many distinguished athletes who have competed at the regional level and republic-wide. He added that the facility would serve equally to house soccer, basketball, and volleyball activities for the youth, and would undoubtedly generate further enthusiasm among the villagers who have resettled here.

Artsakh Fund board member Hovsep Avakian had traveled to Artsakh from Washington, DC for this occasion. Avakian underscored the Fund’s mission to bolster living conditions in Artsakh’s strategic borderlands. “We seek to do everything we can, so that the youth of these border villages can grow fully in a free and unfettered environment,” he noted. “These villages are essentially Artsakh’s gatekeepers, and thus require constant attention. At the same time, through such charitable projects we bind our diasporan communities more closely to the life of liberated Artsakh.”

Avakian was followed by Kamo Barseghyan, a veteran activist representing the ARF Central Committee of Artsakh. In his remarks, Barseghyan recounted the 15-year history of Arajamugh Village, which was built from scratch mainly through the efforts of the Tufenkian Charitable Foundation. Eventually, the Tufenkian team passed on responsibility to Artsakh Fund, which now works together with local authorities and the local ARF to assure the growth and development of the village.

Also present was Ara Melkonian’s sister, Seta Melkonian-Mangassarian, who spoke of the pain and grief they endured upon her niece’s death. While Maral’s absence is keenly felt, she said the dedication of such a lasting structure helps to lighten the burden of her passing, especially given Maral’s own involvements in Artsakh. (During her later years, Maral served on the staff of the Naregatsi Art Institute in Shushi, helping youth in their creative development.) Maral Melkonian-Avetisyan passed away four years ago, following terminal illness.

Also on hand was Artur Makyan, head of Sbarshin Ard LLC, who oversaw construction of the facility. After the ceremony, Makyan noted that the playing field had been built according to European standards with artificial turf possessing a lifespan of up to 10 years. Makyan has built several facilities like this in conjunction with Armenia’s football federation and completed this one in just under a month.

Following the program, the youth engaged in an informal soccer match, while the guests and village elders held a small indoor celebration nearby. During the celebration, Ara Melkonian announced that he will continue his support, via Artsakh Fund, toward the further development of the village.