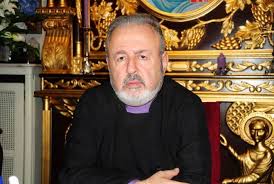 After months of foot dragging, Archbishop Aram Ateshian, the self-proclaimed Vicar General at the Istanbul Patriarchate, on Wednesday stepped down from his post, a mandate placed on him in March when a new Locum Tenens was elected.

Ateshian’s resignation now paves the way for the election of a Patriarch. The process, which will be led by Bekdjian was being delayed due to Ateshian’s refusal.

After the announcement was made by the Patriarchate on Wednesday, Ateshian reportedly invited Bekdjian to Istanbul to assume his duties as Locum Tenens, saying “In order to take this step, we had to wait for the right place and moment. It’s already the appropriate moment.”

“This [Ateshian’s resignation] means that the patriarchal election process will begin with this resignation. The longer Archbishop Ateshyan remained in office, the electoral process was impeded. The elected locum tenens should have led this process, while the latter needed Archbishop Ateshyan to resign in order to exercise his powers,” Bagrat Estukian, editor of the Istanbul-based Agos newspaper told Armenpress on Wednesday.

Bekdjian’s election was supported last week by the Supreme Religious Council of the Holy See of Etchmiadzin during a conclave convened in Moscow.

Incoming Tourism On the Rise in Armenia