Aznavour Receives His Star on the Hollywood Walk of Fame 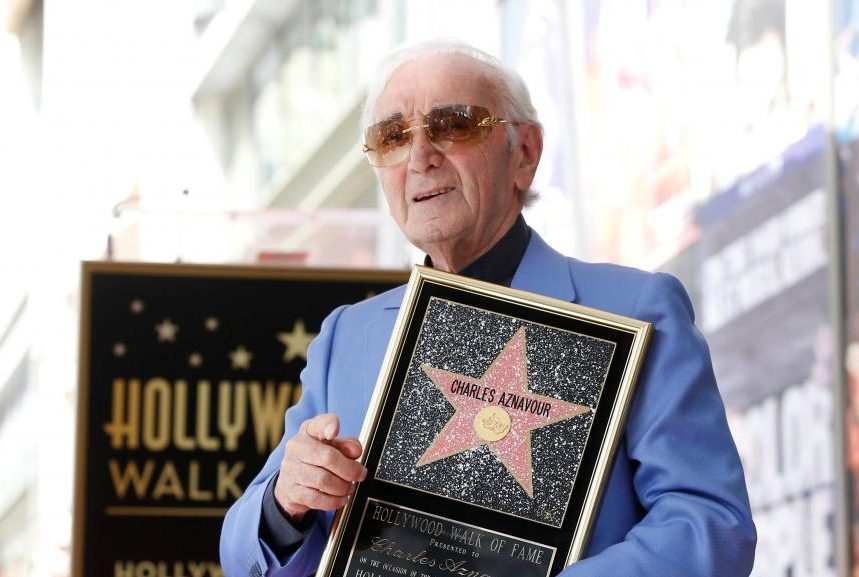 (A.W.), HOLLYWOOD—Scores of fans, invited guests, celebrities, and elected officials gathered in front of Hollywood’s historic Pantages Theater on the morning of Aug. 24 for the unveiling of a star honoring the legendary French-Armenian crooner, musician, and philanthropist Charles Aznavour on the Hollywood Walk of Fame.

California Senate Pro Tem Kevin de Leon had initiated the process for Aznavour to receive a star on the Walk of Fame and was on hand to welcome the singer to California and Hollywood, the entertainment capital of the world.

Born Shahnour Vaghenag Aznavourian in 1924, in Paris, Aznavour was raised in an atmosphere of “music, love, and poverty,” and was always encouraged to entertain. To help support the family, he joined a touring children’s company and even hawked newspapers on boulevards.

“I learned about songs and music from my father and about theater and poetry from my mother. I grew up among singers, actors, dancers who were Armenian and Russian in a Jewish ghetto. Can you imagine what a beautiful combination that is?” Aznavour once said in an interview.

Making his stage debut at nine as an actor-dancer, he spent 20 years fighting to get to the top of the theatrical world, seeing his personally written songs only become famous when sung by Edith Piaf, Mistinguett, Maurice Chevalier, and Juliet Greco, among many others.

“I became a successful writer very slowly. My songs became so popular in France that one day they accepted the man who wrote them. I started the kind of song that faces the reality of life—everyday movement, everyday feelings, everyday story. Nobody before wrote anything about deaf-mute love, homosexual love, a song about an ugly woman. They were all afraid. I’ve done it. Everybody else came after me.”

Since those difficult days, Aznavour has ridden the top of the performing crest. His best has been described in eloquent terms, such as “fantastic charisma” and “electric magic.” He describes it as the “hunger of succeeding, of achieving something. Any entertainer who achieves something important has a monstrous attitude. Piaf was a monster. I’m a monster. We’re frightening people.”

Though described as the Frank Sinatra of France, he has sung in nine languages in the world’s most famous musical venues, including Carnegie Hall and Radio City Music Hall. His songs, such as “She,” “Dance in the Old Fashioned Way,” and “Yesterday, When I Was Young,” are staples in the international record-selling markets and have been performed by world-famous singers. “Ils sont tombés” (They Fell), his song dedicated to the victims of the Armenian Genocide, became a best-seller in many countries.

In 1998, Azanvour was named Entertainer of the Century by CNN and international users of Time Online. He is the recipient of numerous other honors, including the “National Order of the Legion of Honor” and the “National Hero” of Armenia.