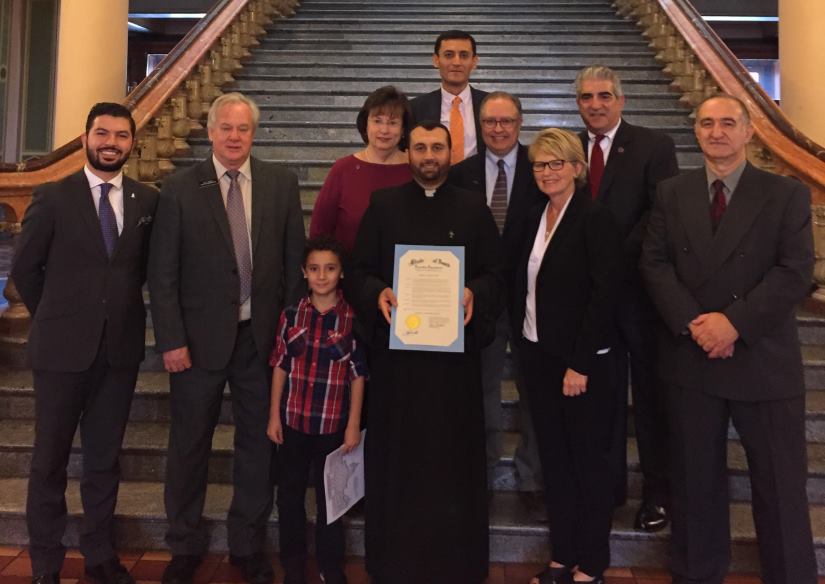 During the official signing ceremony, attended by ANCA-ER leaders and a coalition of human rights groups, including representatives of the Iraqi Christian Relief Council, The Philos Project, and Iowans for Armenia, Governor Reynolds also declared October, 2017, “Armenia Awareness Month.” The ceremony, which was webcast live on the ANCA Facebook page, concluded with a moving prayer offered by Rev. Fr. Tadeos Barseghyan of St. Sahag Armenian Church of Minnesota, which is the closest Armenian church serving the Armenian-American community of Iowa.

“Iowa’s commemoration and condemnation of the Armenian Genocide strikes a powerful blow against the hatred and intolerance which contribute to the ongoing vicious cycle of genocide plaguing society to this day,” said ANCA Eastern Region Board Member Armen Sahakyan, who spent a portion of his youth in the Hawkeye state. “We would like to thank Governor Reynolds, Representative Art Staed, and all of our coalition partners for their principled stance in ensuring that truth prevails against international attempts to subvert justice for this and all other crimes against humanity.”

The Philos Project Executive Director Robert Nicholson noted, “The Ottoman genocide of the Armenian people was one of the most brutal acts in history and clear evidence that evil still moves in the world. To deny the genocide is to ignore that evil, and to ignore that evil is to betray our values as Americans. By recognizing the genocide, the people of Iowa are declaring their willingness to defend human life, protect minority communities, and preserve our national heritage. We at The Philos Project thank and congratulate Governor Reynolds for her boldness and moral clarity. She epitomizes the kind of principled leader we need more of today.”

Iraqi Christian Relief Council Board Member Denise Bubeck said, “This is an important step in standing up for the many Christians who have lost their lives by injustice. As a Christian, I believe that every life deserves dignity and respect just as God values every human life so this proclamation gives me an opportunity again to speak for the value of every life no matter their faith.”

“Mankind must seek justice for those whose lives are brutally altered for all of history,” said President of the Iraqi Christian Relief Council and the Senior Fellow for The Philos Project Juliana Taimoorazy. “This marks a historic step forward towards this sacred endeavor.”

Coordinator for the Iowans for Armenia Charles Crawley said, “As a civilized humanity, we all should care about the Armenian Genocide and all other crimes against humanity. ‘Iowans for Armenia’ is proud to continue the relationship created between the American and Armenian people that stretches back to the humanitarian assistance provided by the missionaries and people of good conscience of our great state through the Near East Relief. Today’s signing of the proclamation was an important step in securing some measure of justice for the Armenian, Assyrian, and Greek people.”

Noting that the Ottoman Turkish government’s crime “still requires justice,” Gov. Reynolds’ proclamation cites Adolph Hitler’s ominous reference to the murder of the Armenian people just days prior to his invasion of Poland and the ensuing Holocaust, which claimed the lives of over 6 million Jews, and resulted in the decimation of other targeted racial and religious minorities. The document recounts the cycle of subsequent genocides of the 20th and 21st centuries, specifically mentioning the 2016 Congressional condemnation of the Islamic State genocide against Middle East Christians, Yezidis and other minorities. It concludes with the assertion that by “recognizing and consistently remembering the Armenian Genocide, the Holocaust and all cases of past and ongoing genocide, we help protect historic memory, ensure that similar atrocities do not occur again and remain vigilant against hatred, persecution and tyranny.”

Alabama, Indiana, and Mississippi are the last three U.S. states that have not yet properly memorialized and condemned the Armenian Genocide.

Aznavour Receives His Star on the Hollywood Walk of Fame