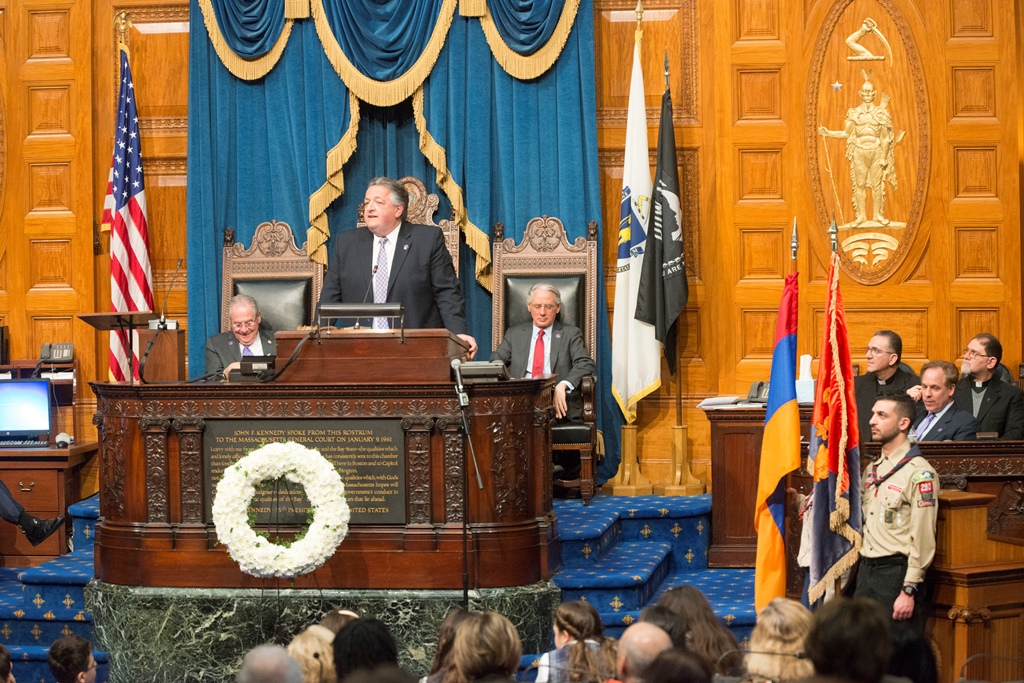 “Armenian weekly”- Martyrs and survivors of the Armenian Genocide were honored under the golden dome of the Massachusetts State House last week during the 104th annual commemoration of the 1915 events.

“We are here to remember,” said State Senator William Brownsberger. For the past 34 years, in the days leading up to April 24, state and local elected officials invite Armenians and human rights advocates to the Massachusetts State House for this annual ceremony, designed to highlight the Armenian heritage and stress the importance of the international recognition of the Armenian Genocide. The event was held only a few days after the Commonwealth’s commemoration of the Rwandan Genocide.

As State Representative David Muradian explained, many of his colleagues in that chamber have an “R” or a “D” after their names. “Truthfully,” he said, “they should have an ‘A’ for Armenian,” alluding that crimes against humanity, including the Armenian Genocide and the genocides that followed, should not be considered partisan issues.

On Friday morning, scouts from Homenetmen’s Boston chapter stood proudly in the Hall of Representatives, each holding American and Armenian flags on either side of the stately wood podium. Students from Watertown’s St. Stephen’s Armenian Elementary School led guests in the singing of the Star Spangled Banner and the Armenian national anthem—a rather emotional example of the dual identity of the Armenian Diaspora.

Resting peacefully in a wheelchair a few feet from the children was 109 year-old Armenian Genocide survivor, “Starry” Asdghik Alemian of Weymouth, Mass. As a great-great grandmother, Alemian and her descendants were described by State Representative Jonathan Hecht as a “living testimony of the indomitable spirit of the Armenian people.” Hecht presented Alemian with the governor’s proclamation of the Armenian Genocide from the Commonwealth of Massachusetts.

Four years ago on the centennial anniversary of the 1915 massacres, which claimed the lives of 1.5 million Armenians and forced hundreds of thousands more to march, the Armenian Apostolic Church canonized the martyrs as saints during a ceremony in Armenia. In his opening prayer at the State House, Reverend Dr. Avedis Boynerian of Watertown’s Armenian Memorial Church urged peace and harmony and “to bring to mind the loving dead who defended the Christian faith and died courageously.”

While Gov. Charlie Baker (R-MA) was not present in the chamber that morning, there were other state and local elected officials including Speaker of the House Robert DeLeo, who reflected on his late predecessor Speaker George Keverian, who started this annual tradition. “As we look towards the future, I hope that events like this will encourage people across this nation and the world to fully and completely recognize these atrocities for what they were: a genocide,” said Speaker DeLeo referencing the Turkish government’s ongoing denial of the Ottoman Empire’s committed atrocities. “While we remember those who perished, we must, most importantly, vow to carry on their legacy to ensure the world never forgets. As humans, as Americans, we must ensure the human spirit outshines inhumanity.”

During his remarks, Middlesex County Sheriff Peter Koutoujian shared the story of his own grandparents, who escaped the persecutions from Marash and eventually found opportunity and a chance for a new life in America. “They became Americans and were not held back for their ethnicity. They were the greatest patriots,” said Koutoujian, who also referenced last spring’s Velvet Revolution in Armenia. “This year has seen the most change and hope for Armenians. We are enjoying something very special. Both America and Armenia are a testament to transparency and democracy.”

“The history of the genocide is full of human tragedies, but also human bravery, philanthropy and humanitarian support,” said local entrepreneur and philanthropist Dr. Noubar Afeyan in his keynote address. Another proud grandson of Armenian Genocide survivors, Dr. Afeyan compelled guests to think about second chances and the immigrant experience. “Armenians have a lot to be thankful for. Every day that I live here, I feel a responsibility to do something about the opportunity that I was given.” Afeyan suggested to Armenians to use their storied past as a source for good and express their gratitude by supporting today’s refugees.

For State Representative Muradian, the only Armenian in the entire Massachusetts legislature, the event served as a reminder to educate those who may not know about the Armenian Genocide, that it’s the least descendants can do. “It is imperative that we continue to honor our ancestors,” said Muradian. “Those stories make up each and every one of us here today.”

During a musical interlude, Moscow-born clarinetist Narek Arutyunian captivated guests with the secular hymns of Khosrovidukht, an eighth century Armenian poet and musician. Clergy from the local Armenian community also led the group in an Armenian intercessory prayer. Following the ceremony, guests were invited to the Great Hall of Flags for light refreshments and to meet with Governor Baker.