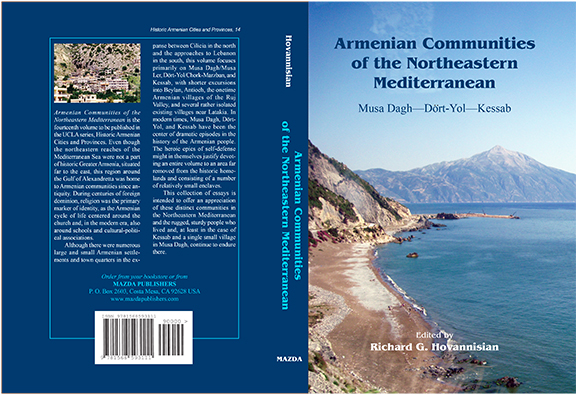 The 14th volume in the UCLA conference series, ‘Historic Armenian Cities and Provinces’ was released by Mazda Publishers in September 2016 under the title of Armenian Communities of the Northeastern Mediterranean: Musa Dagh – Dort Yol – Kessab. The UCLA conference series was organized by Professor Richard Hovannisian, past holder of the Armenian Educational Foundation Chair in Modern Armenian History at UCLA and currently Adjunct Professor of History at the University of Southern California to serve with the Shoah Foundation on Armenian survivor testimonies. Hovannisian has served as the editor of all volumes in the series, in collaboration with Professor Simon Payaslian as co-editor of two volumes.

The current volume includes three chapters on the Northeastern Mediterranean communities in general (including Alexandretta, Antioch, Beylan, the Ruj Valley, and the fraudulent transfer of the Sanjak of Alexandretta to Turkey in 1939), five chapters on Musa Dagh, two chapters on Dort Yol (Chork-Marzban), and four chapters on Kessab, including a final chapter on the three-month occupation of the district by the al-Nusra front in 2014.

The UCLA conference series was begun by Professor Hovannisian in 1999 and continued with semi-annual conferences for more than a decade. In addition to the fourteen conferences on the one-time vibrant Armenian lands and communities of the Ottoman Empire, four conferences have been organized on the communities of Jerusalem, New Julfa, Iran in general, and the Indian Ocean. Steps have been initiated to publish the proceedings of these later conferences under separate auspices.