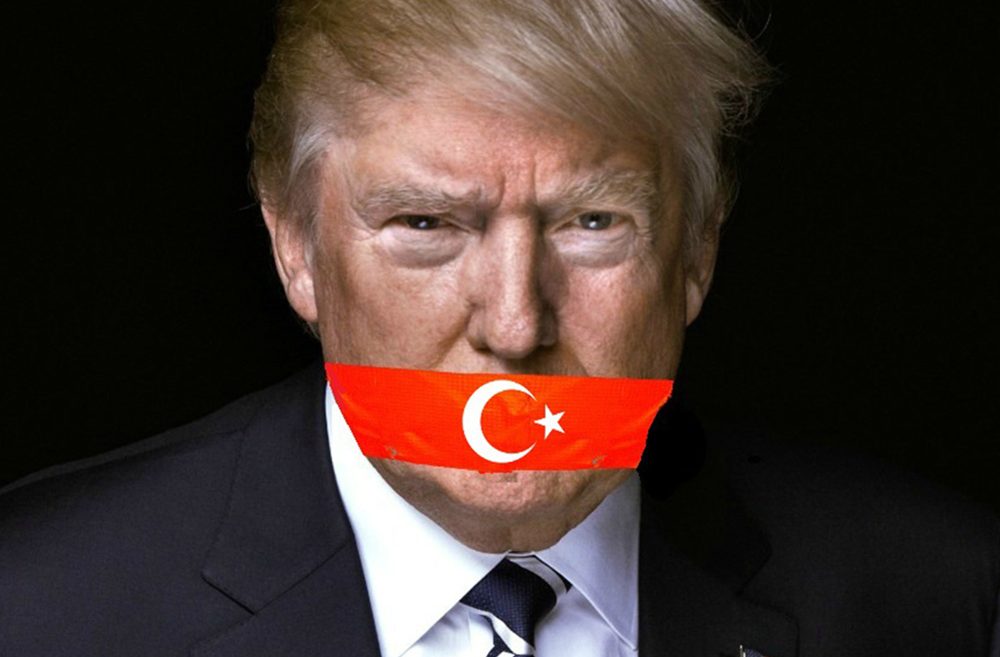 “This is a cut-and-paste policy set in Ankara by Turkish dictators and enforced in Washington by American presidents,” said Armenian National Committee of America (ANCA) Executive Director Aram Suren Hamparian, whose complete response is provided below:

“President Trump has once again granted Turkish President Erdogan – an authoritarian and increasingly anti-American dictator – a veto over honest U.S. remembrance of Turkey’s WWI-era genocide of millions of Armenians and other Christians. This is a cut-and-paste policy, set in Ankara by Turkish dictators and enforced in Washington by American presidents.

-Having promised an America First presidency, he has pursued a Turkey First policy on the Armenian Genocide.

-Having pledged to protest the persecution of Christians, he has enforced a foreign gag-rule against honest remembrance of a century-old crime.

-Having vowed to restore U.S. leadership, he has, instead, outsourced American moral standing to a foreign dictatorship.

We look now to the U.S. Congress to provide the leadership that the White House has failed to deliver.”

The Armenian Genocide was the centrally planned and systematically executed slaughter of the Armenian people, carried out by the Ottoman Turkish Government from 1915-1923.  The Greek and Assyrian / Chaldean / Syriac communities suffered the same fate, with over 2.5 million Christians killed in that time period. April 24th is the international day of commemoration of the Armenian Genocide.

The United States embarked on an unprecedented international humanitarian campaign, mandated by Congress in 1916 through the establishment of Near East Relief, saving over 130,000 orphans and some 1 million survivors of the Armenian Genocide by providing assistance valued at over $2.5 billion in current dollars.

The U.S. first recognized the Armenian Genocide in 1951 through a filing which was included in the International Court of Justice (ICJ) Report titled: “Reservations to the Convention on the Prevention and Punishment of the Crime of Genocide.” The specific reference to the Armenian Genocide appears on page 25 of the ICJ Report: “The Genocide Convention resulted from the inhuman and barbarous practices which prevailed in certain countries prior to and during World War II, when entire religious, racial and national minority groups were threatened with and subjected to deliberate extermination. The practice of genocide has occurred throughout human history. The Roman persecution of the Christians, the Turkish massacres of Armenians, the extermination of millions of Jews and Poles by the Nazis are outstanding examples of the crime of genocide.”

Earlier this month, Representatives Adam Schiff (D-CA) and Gus Bilirakis (R-FL) spearheaded Armenian Genocide legislation (H.Res.296) calling for the proper remembrance of the crime, ending US complicity in its denial and urging public education in an effort to prevent future genocides.  The legislation currently has 89 cosponsors.  A similar resolution in the Senate (S.Res.150) spearheaded by Senators Robert Menendez (D-NJ) and Ted Cruz (R-TX) has 16 cosponsors.

Statement by the President on Armenian Remembrance Day 2019

Today, we commemorate the Meds Yeghern and honor the memory of those who suffered in one of the worst mass atrocities of the 20th century. Beginning in 1915, one and a half million Armenians were deported, massacred, or marched to their deaths in the final years of the Ottoman Empire. On this day of remembrance, we again join the Armenian community in America and around the world in mourning the many lives lost.

On this day, we also honor and recognize the work of those who tried to end the violence, as well as those who sought to ensure atrocities like this would not be repeated, like human rights activist and lawyer Raphael Lemkin. We recall the contributions of generous Americans who helped save lives and rebuild Armenian communities. As we honor the memory of those who suffered, we also draw inspiration from the courage and resiliency of the Armenian people who, in the face of tremendous adversity, built vibrant communities around the world, including in the United States.

We pledge to learn from past tragedies so as to not to repeat them. We welcome the efforts of Armenians and Turks to acknowledge and reckon with their painful history. And we stand with the Armenian people in recalling the lives lost during the Meds Yeghern and reaffirm our commitment to a more peaceful world.