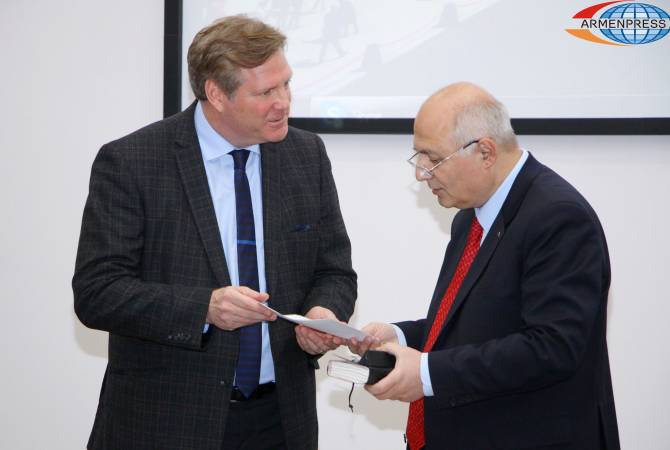 “Armenpress”. The Armenian Genocide Museum-Institute Foundation and the Canadian Museum for Human Rights signed a memorandum of understanding which will enable to upgrade the cooperation.

After the signing ceremony director of the Armenian Genocide Museum-Institute Foundation Harutyun Marutyan said the Canadian Museum for Human Rights carries out major works. “Mass violation cases of human rights in the form of genocides are presented in the Museum. We will try to put the cooperation between these two structures on a real basis, by making it more effective and useful for the two sides”, he said, adding that this MoU is already the second.

Deputy director of the Armenian Genocide Museum-Institute Foundation Edita Gzoyan said several actions are planned by this MoU, one of which is the exchange of exhibits between the two structures, as well as providing certain materials on the Armenian Genocide and other genocides. “The Canadian Museum for Human Rights has several educational programs and as we also attach great importance to education from early age, their experience will be useful for us in this regard. The third direction which we have already implemented with our partners, is the expansion of cooperation between the researchers”, she said.

The MoU enters into force from the moment of signing for five-year term.

The members of the Canadian Museum delegation laid flowers at the Armenian Genocide Memorial and paid tribute to the memory of the innocent victims with a moment of silence.