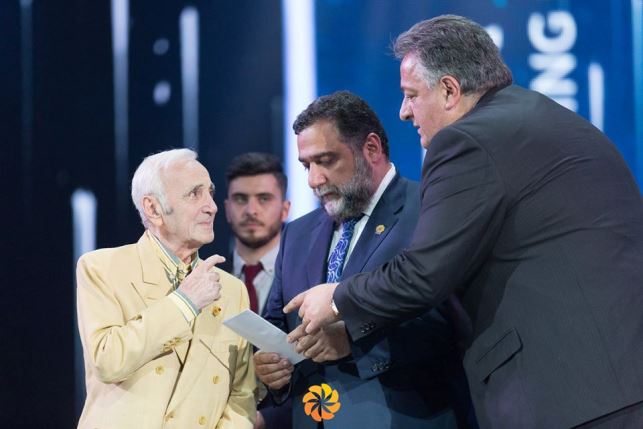 Aurora Humanitarian Initiative Co-Founders Noubar Afeyan, Vartan Gregorian and Ruben Vardanyan have extended condolences over the passing of Charles Aznavour, and announced a scholarship in honor of the great French-Armenian singer, the IDeA Foundation said in a press release.

“Charles Aznavour personified the Armenian story — the child of refugees became a global idol who delivered messages of humanity through his music and his huge personality.

His charisma, his worldliness, his genuine love for people took him around the world and we will all remember him for what he gave us — love, energy, faith in ourselves and our fellow man. He did this as an entertainer and philanthropist. He will not be forgotten and we will miss him. Aznavour lent his name and his energy to the Aurora Humanitarian Initiative from the beginning. He was an important part of the first two Aurora Prize ceremonies in 2016 and 2017.

In his memory, the Aurora Humanitarian Initiative will launch a new annual scholarship as part of the Gratitude Scholarship Program.

This program was established in gratitude to the people of the countries that offered shelter and food to those displaced by the Armenian Genocide more than a century ago. Aznavour was one of those people and he found refuge — and fame — in France. The new scholarship will be awarded annually to students from France — and francophonie countries — who will have the opportunity to study at UWC Dilijan. This scholarship will bring together Aznavour’s two worlds — France and Armenia — and it is a small way for us to memorialize those links and to continue to thank him through the generations.

Charles Aznavour died on October 1 at the age of 94.