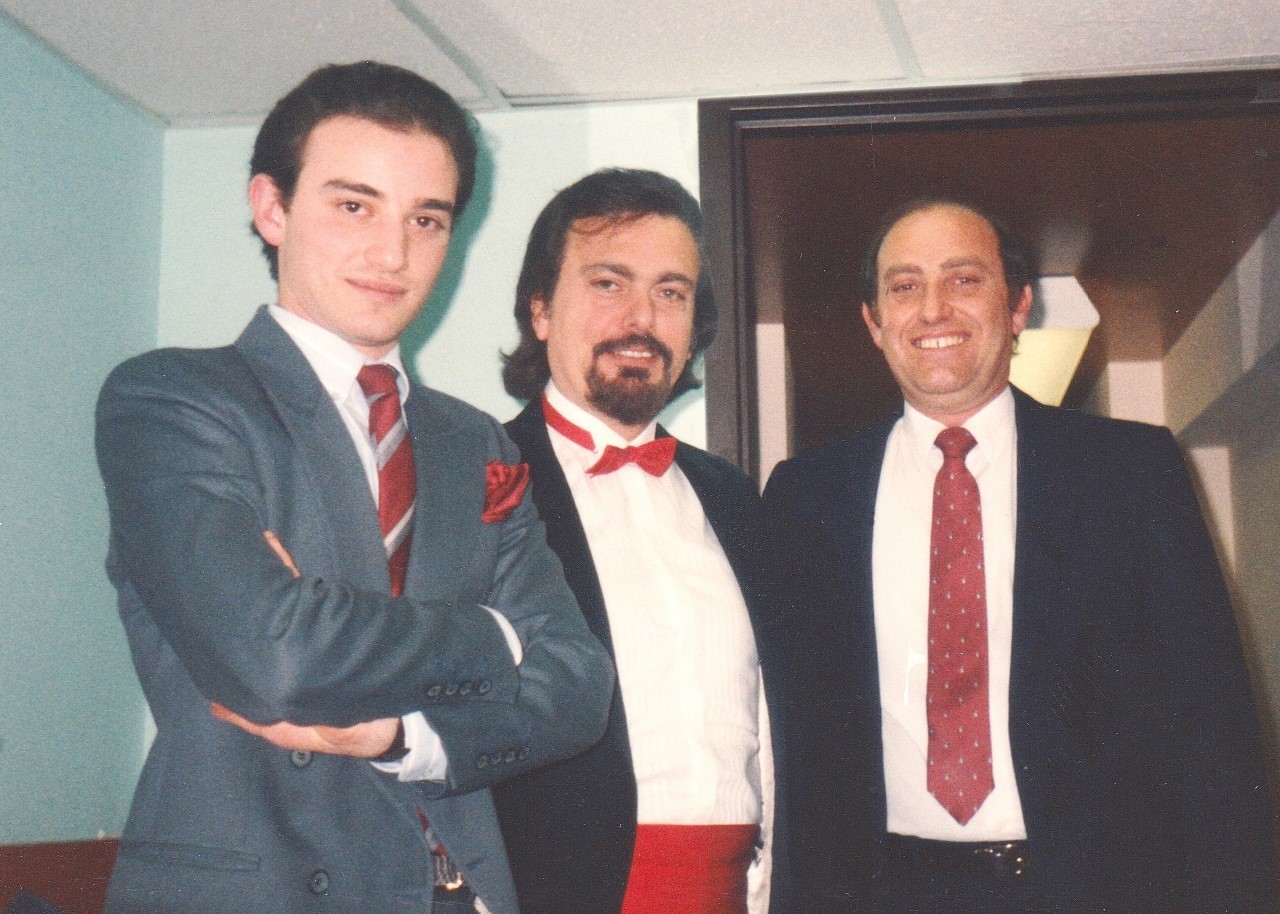 Adiss (center) with father and son Levon and Edouard Ishkhanian in mid 1980s.

Once in a while, amid our busy lives, something catches our attention and we become fully present in the moment to reflect, to think, and to be moved to action. Perhaps it’s a poem, a book, a saying, or a photo. We commit it to our memory and that inspiration lives with us, forever changing our life. If we’re lucky, we find other like-minded people that feel the same, connecting us together, forming a movement. Now imagine this “something” has the power to unite a culture under the most challenging of circumstances, aiding to preserve and shape identity, and inspiring generations to come. For the Armenians in the diaspora it came by way of song. Dzaghigner (flowers) by Adiss Harmandian, answered the musical uncertainty of the Armenian culture in the diaspora by creating a new Estradayin genre, and set in motion the modern Armenian music experience that maintained and preserved the Armenian identity throughout the globe.

By the late 50s, The Armenian community in Lebanon was somewhat autonomous. It had established almost everything needed to maintain and sustain culture – community centres, churches, schools, newspapers, radio stations and political parties. However, the Armenian music offered to the community limited to patriotic songs and performers from Armenia at organized events may have worked for the older generation, but the younger generation was assimilating to European and the music of the Americas, as well as indigenous Lebanese Arabic and neighbouring Mediterranean music.

Essentially no outlet for contemporary modern Armenian music existed until the young upcoming singer, Adiss, entered into the Armenian music scene, with his song “Dzaghigner”, forever changing the Armenian music landscape of the diasporas.  “Dzaghigner” resembled Western aesthetics with song form, instrumentation and vocal style, while maintaining Armenian melody and language. This was the music that the Armenian youth demanded.  Soon afterwards, other artists aimed to replicate this aesthetic, inaugurating Adiss as the pioneer of Armenian pop, creating an Armenian music industry in the diasporas, and establishing the barahantes as an Armenian musical forum. As Adiss gained stardom throughout the Armenian community worldwide, he formed his own record company – Adisc records, and transformed his father’s pastry shop into a record shop. By the age of 26, Adiss was in full control of his musical destiny. He composed, performed, produced, distributed and sold his records under his own terms.

Where most artists can find examples and role models that have established conventional rules and protocol within their own local culture, Adiss did not have any of these; he became the role model. His inspirations were global; Havannes Badalian (for his voice range), Abed Al Halim Hafez (for his emotions in singing), and Elvis Presley (for his stage presence). At the young age of 14, Adiss was already singing international songs.  By the age of 18 he had composed over a dozen French songs.  Just as terroir affects the taste of wine due to local soil, climate and topography, the same can be said of the influence of Lebanon’s musical terroir on Adiss’ Estradayin music. Adiss combined his knowledge of the local terroir, and international musical aesthetics, with Armenian melody and lyrics, pioneering the Armenian Estradayin genre. What he produced had global impacts and became universal in diasporic Armenian culture.

To date Adiss has released over 35 albums, nearly 400 songs, multiple music videos, and even starred in a movie. Along with his first hit “Dzaghigner” (1968), his best known songs are “Nouné” (1970) and “Karoun Karoun” (1973), which has been covered by over 40 singers with versions from Arabic to French, and even as a soundtrack for Japanese Anime.

Adiss’ music inspires discourse with themes such as “good times”, “totally different”, and is multi-generational. As one Lebanese Armenian stated in a conversation:

“The first time I heard Adiss, I was probably 9 or 10 years old.  It was totally different Armenian music that I had ever heard of, or listened to. Even though it was the music for the older crowd at the time; it was still enjoyable to listen to. In Lebanon we were raised by listening to his music, anticipating new singles or “LP” records to be released. It made our family gatherings with his music in the background “warmer”, and our parties livelier; where people danced to his tangos, sambas and waltzes. Before Adiss, most of the popular music that the elderly listened were either Turkish or Middle Eastern influenced. The Armenian folk music was not suitable for the “chic” gatherings, and not danceable in the 60s and 70s era. I believe that he single handedly changed the musical ambience. His sound always resonated good times during my “pre- teenage” years. (From an interview with a Lebanese émigré/community leader).

I am one of the fortunate ones that got access into the “world of Adiss” in Beirut at the young age of 8, as my father Edouard was his musical director. My first professional performance was with Adiss, in Toronto when I was 13. I remember it like it was yesterday. Over the years I have had the pleasure of traveling the world with him, I can attest to the fact that it doesn’t matter where you come from as an Armenian, be it from Beirut, Sydney, Moscow, Tehran, Doha, Khartoum, Paris, Toronto, New York or Buenos Aires, Adiss is musically Armenian central. As Antonio Carlos Jobim helped create and spread the Bossa-Nova movement, and as Frank Sinatra created his own brand of “classy” look and sound inspiring generations of followers, Adiss achieved the same in contemporary Armenian popular music. I have witnessed his artistry first hand, Adiss the pioneer, singer, composer, producer, actor, author, painter, and Prince (as bestowed on him by Catholicos Aram I), a testament to the centrality of Adiss to Armenian diasporic cultural identity by way of song.