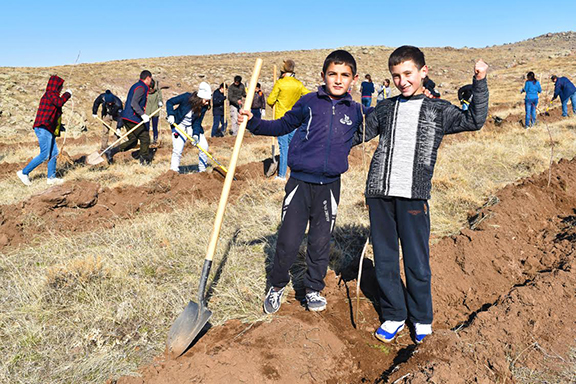 ATP hired temporary workers and partnered with volunteers young and old to
plant more than a quarter of a million trees this year, bringing the total to 5,216,500 since 1994.

Marrakech set out a global action plan to put the world on track to avoid dangerous climate change by limiting global warming to well below two degrees Celsius and pledged to reduce carbon dioxide emissions. As we all know, trees are the most effective absorbers of carbon dioxide gas that is a major contributor to climate change.

By the end of 2016, ATP planted another 263,858 trees, bringing the total to 5,216,500 trees planted since the organization was founded by Carolyn Mugar in 1994. Beyond Marrakech, we are reminded that ATP addresses nine of the UN’s Sustainable Development Goals including “Life on Land” aiming at halting deforestation.

This year significant changes in weather conditions were visual proof of climate change happening in Armenia. “The Spring plantings ended in mid-March, which is when we usually start them,” noted Forestry Manager Navasard Dadyan, who added that the Fall planting season was also unusually short.

Nevertheless, the forestry team planted 164,584 oak, ash, wild apple, and pear trees this fall. Seventy workers hired from nearby villages were engaged in planting in the Koghes and Tashir communities of Lori.

“It’s gotten much warmer here,” said one worker from Tashir. “This area used to be the most humid in Armenia but now the climate’s slightly different. I even spotted a snake recently.”

The first two Sustainable Development Goals, reducing poverty and hunger, have always been part of ATP’s focus. ATP’s Community Tree Planting (CTP) program provided fruit trees, shrubs and evergreens to community sites and families in the villages of Berkaber, Aygepar and Chinari in Tavush near the border with Azerbaijan.

“The law of harvest is to reap more than you sow,” said CTP manager Arthur Harutyunyan, who added that 963,793 pounds of fruit was harvested from ATP’s trees in 2016. Some of the major types were apricot, peach, pear, plum and apple. The fruit trees are distributed to families and community sites throughout Armenia, and the harvest is collected by local residents for their own use.

This fall, 30,667 trees were planted by the CTP department at 89 sites in Armenia and Artsakh. In addition, eight new community forests were established.

With the help of volunteers, ATP greened historical sites including Tigranakert and the grounds of Gandzasar Monastery in Artsakh, as well as the Bash Aparan Monument and Vanadzor Technopark.

ATP also partnered with a number of organizations to plant trees. Employees and their families from several companies and organizations including Synopsys, Asian Development Bank, FINCA, Ernst and Young and Rotary Club planted trees at our sites this Fall.

“For a Corporate Social Responsibility event it’s important that we’re partnered with a serious organization that not only has the technical skills but also the right mission and vision. ATP’s vision is to green Armenia and we’d like to be a part of that. So it’s not just about us and our event, it’s about leveraging what we’re doing to help a bigger cause,” said Shane Rosenthal, country director of the Asian Development Bank.

“It feels great to give back to our homeland and to fight climate change at the same time,” noted one of the volunteers planting trees in the foothills of Mount Aragats.