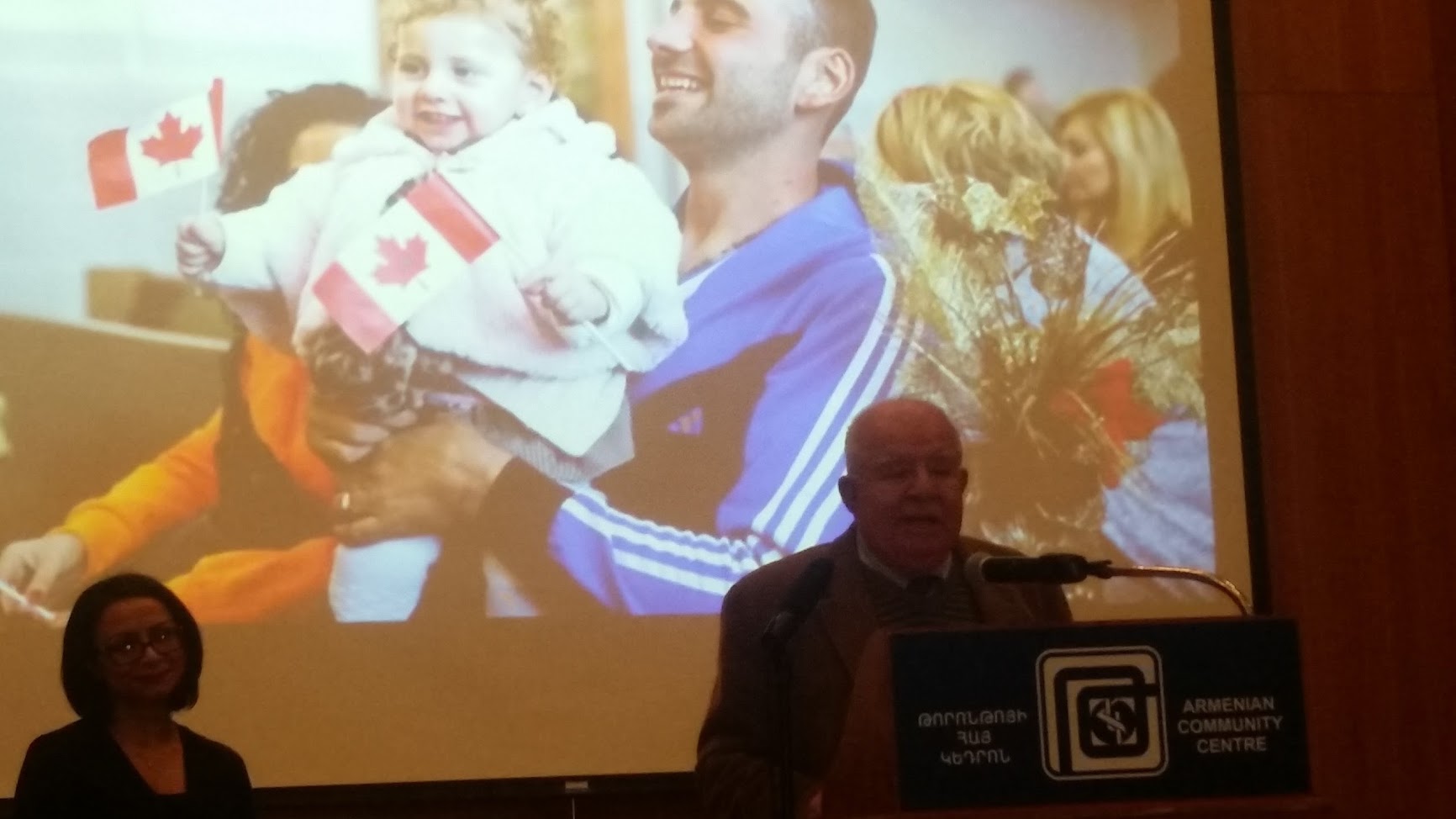 On December 10, the Armenian Community Centre (ACC) of Toronto marked the first anniversary of the first plane of privately sponsored Syrian newcomers that arrived in Canada. Coincidentally, the date also marks the day of signing the Universal Declaration of Human Rights in 1948.

The event had a large crowd of attendees including local and municipal politicians and was covered by the local and Canadian media.  Newcomers shared their experiences, the joys and struggles as they establish themselves and acclimatize to their new environment. The event was also attended by officials from COSTI Immigration Services, JVS, and Refugee, Sponsorship Training Programs and Immigration, Refugees and Citizenship agency.

The welcoming remarks were read by Marianne Davitjan, master of ceremonies, who invited new comer Talar Simonian to sing the national anthem. Later, she drew parallels with the Georgetown boys who in 1923 were brought to Canada as an attempt to save the orphans from horrors of the Armenian Genocide and provide them with a safe heaven. Canada can still pride itself as a place where immigrants and refugees are welcome – a safe haven strengthened by diversity and multiculturalism, she said. Chairman of the Armenian Community Centre, Hagop Janbazian, thanked the attendees and gave praise for the huge amount of work and dedication that went into ACC sponsorship program.

Apkar Mirakian, ACC-SAH chair, thanked the co-sponsors‎ who helped out and even opened their homes to new comers; the donors who helped all new comers in their accommodation needs and the many volunteers who worked tirelessly and collectively to make the program work.

He also extended gratitude to the Canadian and Ontario government employees who worked throughout their holidays, around the clock and readily answered to all the needs that arose along the way.

She also provided an update about the current status of the newcomers: Nearly all are currently employed while three people have started their own businesses. All of the school aged children and youth are enrolled in the Canadian school system (82% are enrolled in English Language Classes). 500 have obtained drivers licenses (either G1 or G2). Also, there have been 7 marriages, 6 births and 15 christenings and baptisms.

It worth noting that from December 10, 2015 to December 10, 2016 Armenian Community Centre SAH has privately sponsored 2500 (400 families) Syrian Armenian New Comers and currently there are approximately 400 applications in process.

The Promise’ Picked Up by Open Road Films, Gets April Release Date