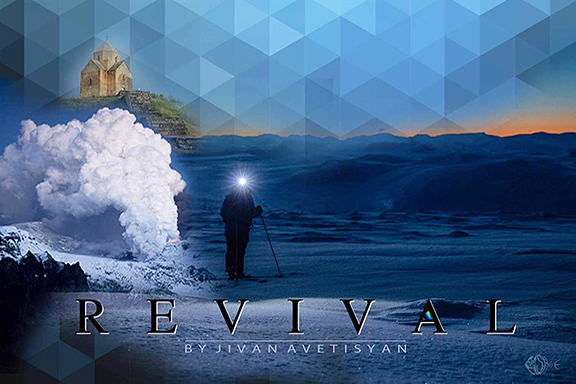 Armenian filmmaker Jivan Avetisyan has been selected from over 3,400 applicants from 134 countries to attend the “Berlinale Talents” in Berlin, Germany. “Berlinale Talents” is an initiative of the Berlin International Film Festival. Jivan Avetisyan’s new feature film project “Revival,” slated for production in Spring 2021, was the premise of his selection. The six-day summit will be held from February 22 to 27, 2020.

The selection committee shared with Jivan Avetisyan: “We appreciate your ambitious approach to filmmaking and to the content of your stories. In 2020, “Berlinale Talents” is going collective: the six-day summit looks at proven and experimental community models in four creative fields: “Cinema,” “Film Set,” “Company,” and “Society.” Collectives from the film, art, and theatre worlds will come to Berlin for the nearly 100 talks, workshops, and networking events.”

An international award-winning film director, Jivan Avetisyan, is best known for his first feature film “Tevanik” (2014), as well as his second feature film “The Last Inhabitant.” “Tevanik” was screened at the 67th Cannes International Film Festival and received worldwide attention from cinema professionals who were in attendance. It also screened in more than twenty countries worldwide and participated in various film festivals held in Armenia, China, Italy, Romania, and the United States, winning honorary awards including in the category of Best Feature Film. The film was translated into nine languages and was represented by international distribution in Greece, Romania, and the United States.

The second full-length feature film, “The Last Inhabitant,” was created in 2016, again with the collaboration of the National Cinema Center of Armenia and Lithuanian Artbox Production House. It was presented at several significant international film festivals including the 69th Cannes International Film Festival, Le Marché du Film. The film was also considered for the 2017 Golden Globe Awards, “Best Foreign Language Film category.” Additionally, “The Last Inhabitant” was included in the 20th Shanghai International Film Festival in the “Panorama” Program. It was then screened at the 74th Venice International Film Festival (August 30 to September 9, 2017) within the framework of the “Venice Production Bridge.” Most importantly, the film was purchased and licensed by HBO to air in Eastern European countries.

The cast included A-class, world famous talent from Iran, Lithuania, Greece, Russia, and the U.S. The film’s composer is a prominent “System of a Down” rock group soloist, Serj Tankian. The band achieved commercial success with the release of five studio albums, three of which debuted at number one on the Billboard 200. System of a Down has been nominated for four Grammy Awards, and their song “B.Y.O.B” won the Best Hard Rock Performance in 2006. The music of “The Last Inhabitant” was recorded live with the participation of the Armenian Philharmonic Orchestra, under Artistic Director and Principal Conductor Eduard Topchyan and Hover Chamber Choir, Artistic Director, Sona Hovhannisyan. Serj Tankian’s musical score for “The Last Inhabitant” was considered by Golden Globes for Best Original Score (2017). Today, the Original Motion Picture Soundtrack is available on Amazon, iTunes, and other music platforms for streaming or purchase.