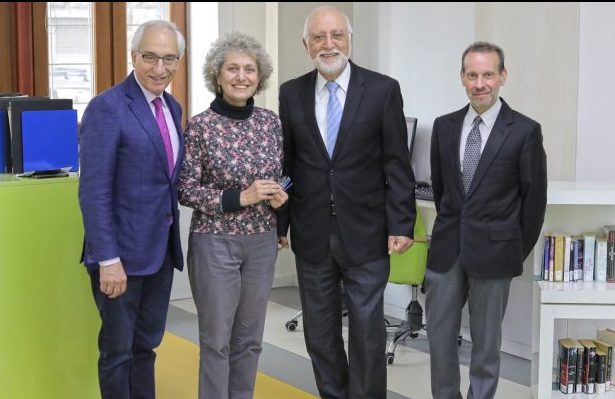 The Zoryan Institute and the American University of Armenia are announced the launch of the Zoryan Institute and AUA Center for Oral History. The Zoryan Institute will be depositing copies of its renowned Armenian Genocide Oral History Archive to a dedicated Center on the AUA campus. The University will provide the facilities for the Center, which will house the collection, thereby creating the opportunity for students and scholars to view and research the materials in the collection. Additionally, AUA students will transcribe the recordings in the collection, and those in Armenian will be translated into English to increase the usefulness of these invaluable resources.

Zoryan’s Oral History Collection is one of the Institute’s earliest, largest and most significant projects. It began in 1983 when it became evident that time was running out for capturing the eyewitness accounts of the generation of survivors of the Armenian Genocide.

To this day, the collection holds considerable significance for scholars, students, researchers and filmmakers. Tremendous effort was made into developing the interview questionnaire that would not only elicit information about the Genocide, but also provide details and valuable insights into the life of the Armenian people before the Genocide. The questions were designed to garner as much detail as possible, covering a range of topics from games the Armenians played at home to their personal experiences during the Genocide.

This project was an enormous and costly undertaking at the time. The Institute purchased state-of-the-art camera equipment and hired professional videographers to ensure the quality of the recordings. There were teams of Institute staff and volunteers who conducted the interviews with survivors living across North America and Armenia.

The collection consists of approximately 800 video recordings of interviews with Genocide survivors, now digitized, making it the largest video collection of Armenian survivor testimonies. While there are earlier oral history collections, this project by the Zoryan Institute has added a valuable visual dimension. Many researchers who have used the collection have commented how the video testimonies have considerably enhanced their understanding of what the survivors recalled when coupled with the interviewees’ body language and expressed emotions.

Animation Based on Oral History:

The Institute is currently working with the largest documentary film studio in Yerevan, BARS Media, to produce the animated film, Aurora Sunrise. This film will bring to life Aurora Mardiganian’s amazing story of survival through animation, using the Institute’s Oral History Project of the 1980s. Aurora Mardiganian wrote the best-selling book, Ravished Armenia, in which she shared her survivor experiences. She later starred in a film adaptation—one of the biggest blockbusters of the silent-era. Animating Aurora’s interview will make her story more dynamic and expand its reach to larger audiences . Through this film, Aurora’s 104-year-old story will be accessible to future generations perpetually.

Additional materials from other similar oral history collections and projects, such as the Zoryan Institute’s Syrian-Armenian Oral History Project, will be subsequently added to the Center’s collection. The Zoryan Institute will also use the newly established Center to publish oral histories as educational material for researchers, as was done in its 1989 publication of The Sumgait Tragedy: Pogroms against Armenians in Soviet Azerbaijan. The Zoryan Institute and AUA Center for Oral History could serve as an ideal platform for embarking on a new oral history project that would document the Velvet Revolution and its impact on the nation.

For more information about the American University of Armenia, visit the website.