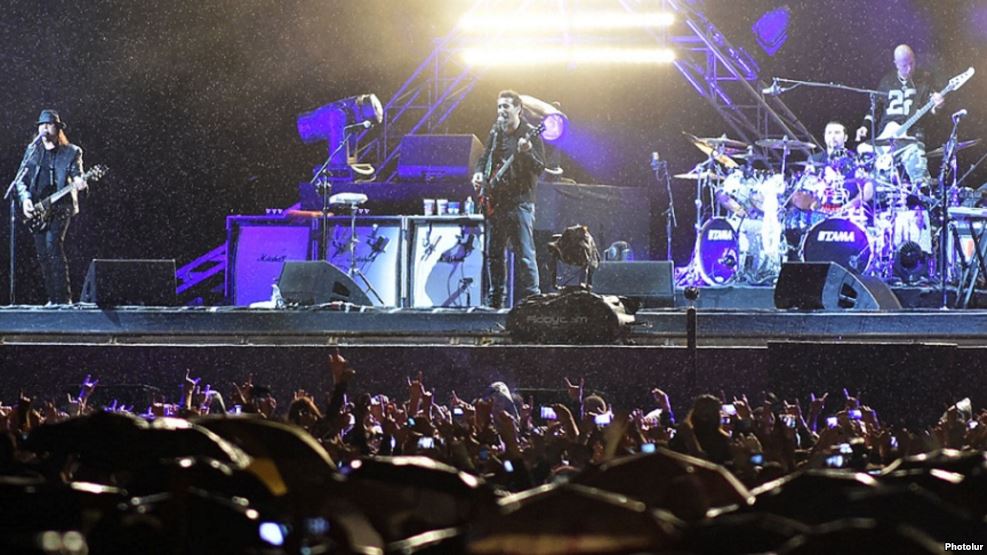 Rock musician Serj Tankian and several other prominent Diaspora Armenian artists said on Monday that they will monitor Armenia’s forthcoming parliamentary elections in a bid to help ensure that they meet democratic standards.

Tankian, Canadian-Armenian actress Arsinee Khanjian, her husband and filmmaker Atom Egoyan and his Armenian-American colleague Eric Nazarian said their “Justice Within Armenia” campaign plans to deploy 20 observers for the polls scheduled for April.

The campaign was launched in late September with a joint online petition signed by them and more than two dozen other well-known individuals, virtually all of them ethnic Armenians living in Europe and North America. They called on Armenia’s government to end widespread corruption, respect laws and hold democratic elections.

“Diaspora Armenians are quite detached from political, social or economic events in Armenia,” Tankian told a news conference in Yerevan via video conference.

The lead singer of the U.S. rock band System Of A Down complained that Armenia and its worldwide Diaspora are “more separated than we thought.” “We should definitely change that, and our joint effort is the first step,” he said.

In a November 26 speech, President Serzh Sarkisian pledged to strengthen Armenia’s ties with the Diaspora and, in particular, seek more input from “our compatriots who have achieved global success.” In that regard he mentioned several wealthy Diaspora Armenian businessmen who have invested in their ancestral homeland are “truly concerned” with its development. He also praised traditional Diaspora organizations that have rarely criticized Armenian governments’ records on democracy and human rights.

But in what may have been a reference to “Justice Within Armenia,” Sarkisian blasted other Diaspora Armenians who “do not understand our reality … but have assumed the role of judges and are slamming and reproving us at every corner.” “I am sure such behavior has no prospects and will simply end over time” he said.

Khanjian, who spoke at the Yerevan news conference in person, reaffirmed her harsh criticism of the Sarkisian government’s track record. She said that the July 17 seizure by radical opposition gunmen of a police compound in the Armenian capital most probably resulted from widespread popular discontent with the authorities.

Khanjian addressed one of the Yerevan rallies held in support for the gunmen that demanded Sarkisian’s resignation. She was briefly detained by riot police when she attempted to attend another protest near the besieged compound.

The gunmen laid down their arms after a two-week standoff with Armenian security forces, which left three police officers dead.