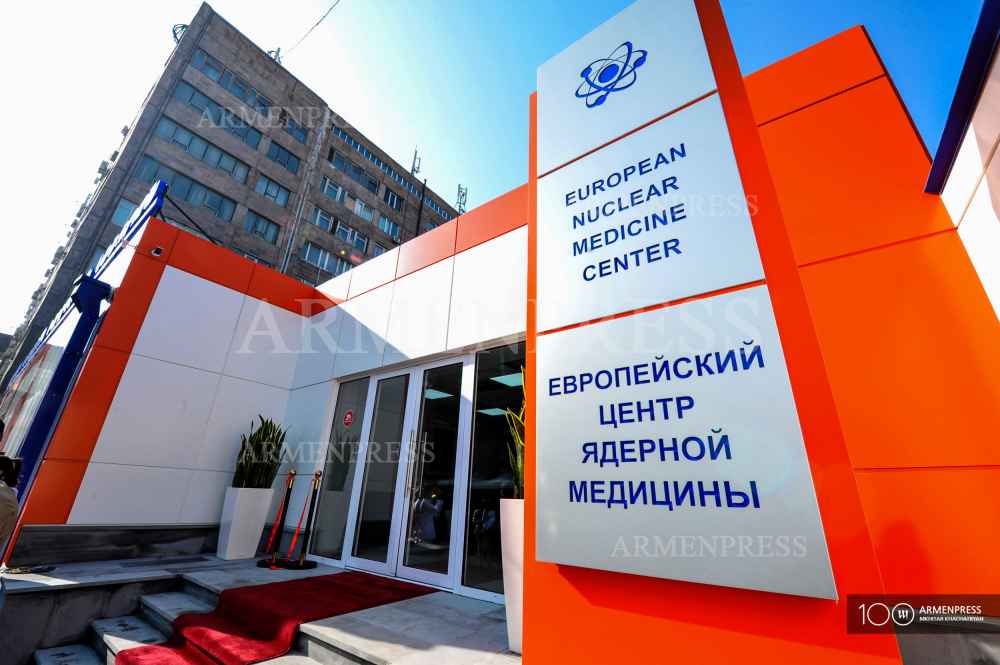 (Azatutyun)- A new medical center providing radioisotope-based diagnosing and treatment to cancer patients has opened in Armenia amid a growing demand for the service that thus far Armenians have been able to get in the region only by traveling to neighboring Georgia.

The European Center of Nuclear Medicine fitted out with up-to-date equipment is the first such facility in Armenia that will provide radioactive iodine therapy for thyroid cancer, a disease that has a high rate in the country and the region in general. The center is located in one of Yerevan’s suburbs in close proximity to the Erebuni Medical Center.

“Nuclear medicine is making great strides and is becoming a very trendy field in the world. That’s why our administration has decided to have an advanced center [of nuclear medicine] in Armenia,” executive director of the Erebuni Medical Center Mikayel Manukian said.

“Now patients will be able to receive high-quality therapy in Armenia, since all of our specialists are well-trained. We have a team of very good young physicists,” he added.

According to Manukian, patients who until now had to go abroad for radioactive iodine therapy for thyroid cancer will be able to receive this treatment locally. Besides being more convenient, it will also be less costly for them, he added.

“A primary examination will cost patients about 40,000 drams ($85),” he said, adding that the issue of government-funded treatment for socially vulnerable groups will further be discussed with the Ministry of Health.

The newly opened European Center of Nuclear Medicine in Armenia will be headed by radiologist Natalia Shengelia-de Lange, who had worked for 15 years at a Vienna Medical University clinic before heading two nuclear medical centers in Georgia.

“The center is equipped at the highest level. All measures of radioactive safety have been taken into account for both the patients and the environment,” Shengelia-de Lange said.

Isotopes for the needs of the center will be imported from abroad in a particular quantity based on the needs of patients.

Several months ago scientists at Yerevan’s Physics Institute announced that they had finally put a cyclotron into operation and managed to obtain a medical isotope.

But the center’s physicist Gurgen Elbakian stresses that the isotope obtained at Yerevan’s Physics Institute is not what is needed for the center. “We have two types of isotopes here. One is used for diagnosis purposes and the other for thyroid cancer therapy,” he said.

Representatives of the center do not rule out that they will use the locally obtained isotopes if these isotopes are stable and of good quality. “There are still not isotopes [that we want] in Armenia. We hope that due to our physicists they will become available soon. But at this point we have an exclusive contract with one of the largest European isotope producers. These medical isotopes will be delivered to Armenia on plane,” Elbakian said.

The European Center of Nuclear Medicine has been constructed as part of the Erebuni Medical Center’s investment project. More than $1.2 million have been spent on the construction of the new facility that has lead lined walls and doors providing shielding from radiation.

For safety reasons patients receiving high-dose radioactive iodine therapy often have to be isolated for several days. The center says it provides various facilities for self-service as well as entertainment in patient rooms. Safety features also include a separate sewage system for rooms containing dangerous substances.

The ceremonial opening of the center today was also attended by Armenian Prime Minister Nikol Pashinian. The center is due to start receiving its first patients beginning on Saturday, November 9.