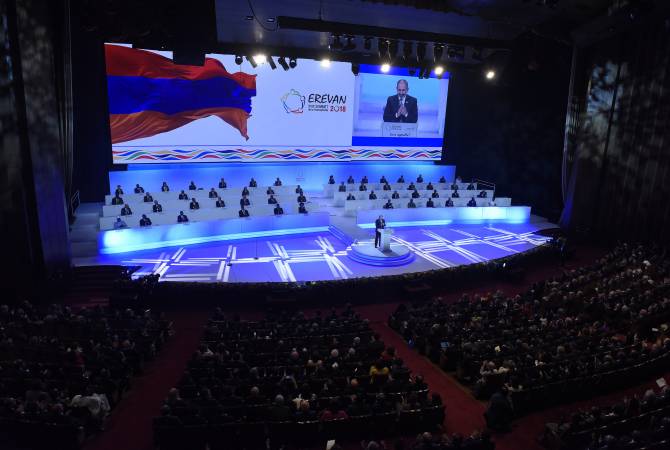 “Armenpress”.- Delegates of the XVII summit of the International Organization of La Francophonie applauded and saluted the eternal presence of Charles Aznavour.

In opening remarks, PM Nikol Pashinyan said that he wants to express the endless pain which he feels when thinking about Aznavour.

“Such a valuable person, who left us on October 1. This great person, the ambassador of French language was 100% French, and at the same time 100% Armenian. As he himself used to say, he would like to be next to us longer, to express his dedication to his beloved two countries, France and Armenia, also to mark the Francophonie celebration, to which he served his all life. His masterpieces of French chanson, which have already accompanied many generations and will continue to accompany many more, will remain in our memories for long time. We grieve because we love. He, being a vigorous defender of Armenia, the ambassador of our country in international organizations, has kept Armenia’s name high. We will eternally be grateful to him. He left us, but is present in our thoughts. Instead of holding a moment of silence to honor his memory, I am asking to celebrate his memory by warmly applauding Charles Aznavour’s eternal presence,” Pashinyan said.