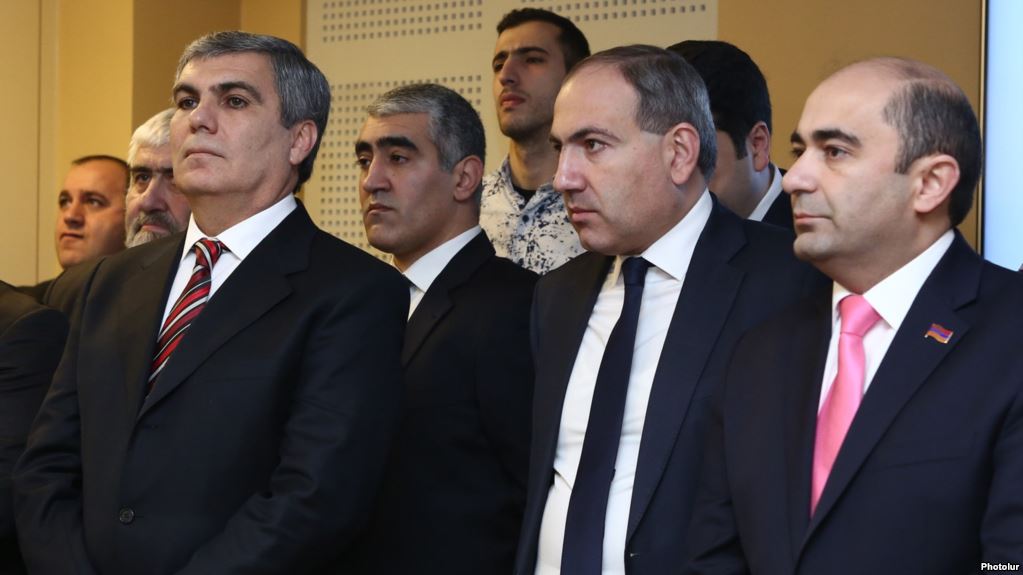 One of them, Edmon Marukian, all but ruled out the possibility of striking far-reaching political deals with Ohanian or Tsarukian as a result of the April 2 parliamentary elections.

“As far as these two opposition forces are concerned, I haven’t heard any opposition statements [by them,]” said Marukian. “Just listen to what those people are saying. Do you know what they want?”

Nikol Pashinian, another leader of the Yelk (Way Out) alliance, claimed that Ohanian and Tsarukian would rather cut power-sharing deals with President Serzh Sarkisian’s Republican Party of Armenia (HHK) than opposition forces.

“It’s more likely that they will form a coalition with the HHK, if they get such a chance,” Pashinian told reporters. “They have yet to prove in the political arena what they mean when they say that they are in opposition.”

Tsarukian was reinstated as chairman of the Prosperous Armenia Party (BHK) last week almost two years after retiring from politics under strong government pressure. The tycoon, whose alliance will comprise the BHK and several smaller groups, has deplored the socioeconomic situation in Armenia. But he has stopped short of criticizing Sarkisian or calling for regime change. For his part, Ohanian has spoken of “growing public distrust of the authorities” and advocated “systemic changes” in the country since being sacked as defense minister in October. He and two former foreign ministers, Vartan Oskanian and Raffi Hovannisian, announced the establishment of their election bloc on Monday.

Ohanian publicly agreed with Oskanian’s and Hovannisian’s belief that there are political prisoners in Armenia. He declined to name any of them, though.

“He will soon demand freedom for the political prisoners,” scoffed Marukian.

Pashinian likewise questioned the sincerity of Ohanian’s and Oskanian’s current political statements. “For ten years, Vartan Oskanian was the number person justifying the existence of political prisoners in Armenia to the outside world,” charged the outspoken oppositionist.

Pashinian went as far as to compare Oskanian to Joachim von Ribbentrop, Nazi Germany’s infamous foreign minister who was sentenced to death during the Nuremberg trials in 1946.

Oskanian served as foreign minister throughout former President Robert Kocharian’s 1998-2008 rule that ended with a deadly post-election crackdown on opposition protesters in Yerevan. Ohanian was the chief of the Armenian army’s General Staff at the time. He was tasked with enforcing a state of emergency declared by Kocharian during the unrest.

Aram Sarkisian, the third Yelk leader, said that his bloc cannot collaborate with Oskanian and Ohanian because both former ministers have what he considers a pro-Russian geopolitical orientation. He also said that Tsarukian became one of Armenia’s richest men during Kocharian’s presidency thanks to his businesses’ privileged treatment by the government.

Yelk was set up in December by Marukian’s Bright Armenia, Pashinian’s Civil Contract and Sarkisian’s Republic parties. In a joint declaration, they said they will strive for a “European model of the democratic, rule-of-law and social state” in Armenia.Republic and Bright Armenia have a pro-Western orientation, while Civil Contract advocates a more neutral Armenian foreign policy.

Their leaders spoke to the press on Tuesday after announcing that Yelk’s list of election candidates will be topped by the 36-year-old Marukian. Sarkisian and Pashinian will be second and third on the list respectively.