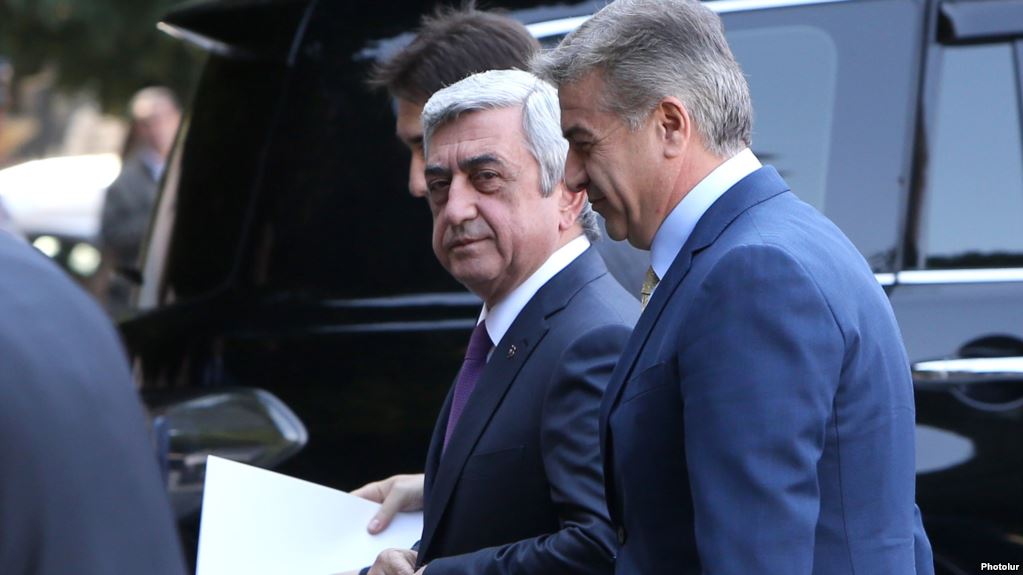 (RFE/RL)- Armenia’s recently amended constitution will not bar Prime Minister Karen Karapetian from retaining his post when it comes into force next year, a leading member of the ruling Republican Party (HHK) insisted on Feb 14.

The constitutional amendments call, among other things, for Armenia’s switch to a parliamentary system of government immediately after President Serzh Sarkisian serves out his second and final term in April 2018.

One of the amendments requires all members of a new government to be formed at that time to have “permanently resided” in Armenia for the past four years. The Armenian Electoral Code specifies that they must have stayed in the country for at least 731 days during the four-year period.

Karapetian worked in Russia from 2011 until Sarkisian appointed him as prime minister in September 2016. Armenian commentators have suggested that he will therefore be not eligible to keep his job in April-August 2018.

Vahram Baghdasarian, who leads the HHK’s parliamentary faction, challenged that view. “We still have about two years remaining before [April] 2018, and if we do these calculations in accordance with the letter of the law, this issue will be settled,” he told RFE/RL’s Armenian service (Azatutyun.am).

Asked whether he believes Karapetian can stay on as prime minister in 2018, Baghdasarian replied: “I am sure [about that,] and not only I but also specialists who are doing these calculations. I think that we won’t have such an issue.”

The four-year residency requirement already applies to individuals wishing to participate in Armenia’s upcoming parliamentary elections. HHK representatives say this is the reason why Karapetian has not been included on the party’s list of election candidates. The list is topped by Defense Minister Vigen Sargsian.

President Sarkisian made clear in November that Karapetian will remain prime minister if the ruling party wins the 2017 elections. But he did not say whether he plans to succeed Karapetian or install another premier in April 2018.

Some Armenian opposition leaders claim that Sarkisian amended the constitution in 2015 in order to be able to extend his rule by becoming prime minister or parliament speaker. But there have also been suggestions that he plans to continue exerting a strong influence on government affairs after April 2018 only in his capacity as HHK chairman.

Baghdasarian declined to shed light on Sarkisian’s political future, saying only that the latter will definitely not be the speaker of the next National Assembly. He also emphasized the fact that Sarkisian is not among the election candidates fielded by the HHK. The president thus wants to stave off fresh opposition allegations that the ruling party is using government resources to win the April 2 elections, added Baghdasarian.