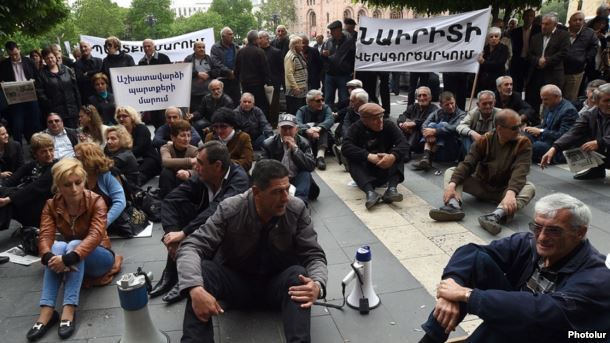 Poverty in Armenia will continue to fall slowly but steadily in the coming years thanks to faster economic growth, the World Bank said in a report published on Tuesday.

“Modest but positive growth projections for agriculture and industry, combined with an increase in real wages in both the public and private sectors, are likely to support continued poverty reduction during 2017-18. As a result, the poverty rate is projected to decline from 24.9 percent in 2016 to 23.2 percent in 2018,” reads the bank’s latest Economic Update on Europe and Central Asia.

According to the report, just over 30 percent of Armenians lived below the World Bank poverty line of $2.5 per day as recently as in 2013.

The Armenian government has reported higher poverty rates in recent years, apparently because of a higher set welfare threshold. Its figures are based on regular household income surveys conducted by the National Statistical Service (NSS).

The NSS said earlier this month that the poverty rate fell from 30 percent in 2014 to 29.8 percent in 2015. Some critics of the government maintain that the real percentage of poor people is significantly higher.

Poverty fell more rapidly during an almost a decade of double-digit economic growth in Armenia that came to an end with the onset of a global financial crisis in late 2008. The official poverty rate stood at 27.6 percent at that time. It soared to almost 36 percent in 2010. Economic growth in the country has been relatively sluggish since then.

The World Bank expects the Armenian economy to grow by 3.1 percent this year on the back of a sharp rise in exports to Russia, which has somewhat offset a continuing drop in multimillion-dollar remittances from Armenian migrant workers in Russia. The falling remittances have suppressed consumer demand, causing the retail and construction sectors to shrink.

The World Bank report says that economic growth will likely accelerate to 3.3 percent next year and 3.6 percent in 2018. “As the global economy rebounds and Russia’s recession passes its nadir, economic activity in Armenia is expected to moderately accelerate over the medium term,” it says.

The bank warned at the same time of “considerable downside risks” for its economic outlook. “Any reversal in the external environment and/or a slower-than-expected recovery in prices for Armenia’s critical metal exports represent significant risks to economic growth and job creation,” it said.

Another risk factor, says the report, is parliamentary and presidential elections due in 2017 and 2018. They could “delay the implementation of much needed structural reforms to improve the business environment,” it explains.

Armenia’s recently reshuffled government has pledged to speed up those reforms. Prime Minister Karen Karapetian, who took over in September, insisted on Monday that his cabinet is committed to effecting “the most rapid change that’s possible.” “We will create an even, competitive, level playing field,” Karapetian told the Bloomberg news agency.

Opposition leaders dismiss these reform pledges as a gimmick. They claim that President Serzh Sarkisian and his Republican Party of Armenia are trying to fool disgruntled voters ahead of next April’s general elections.