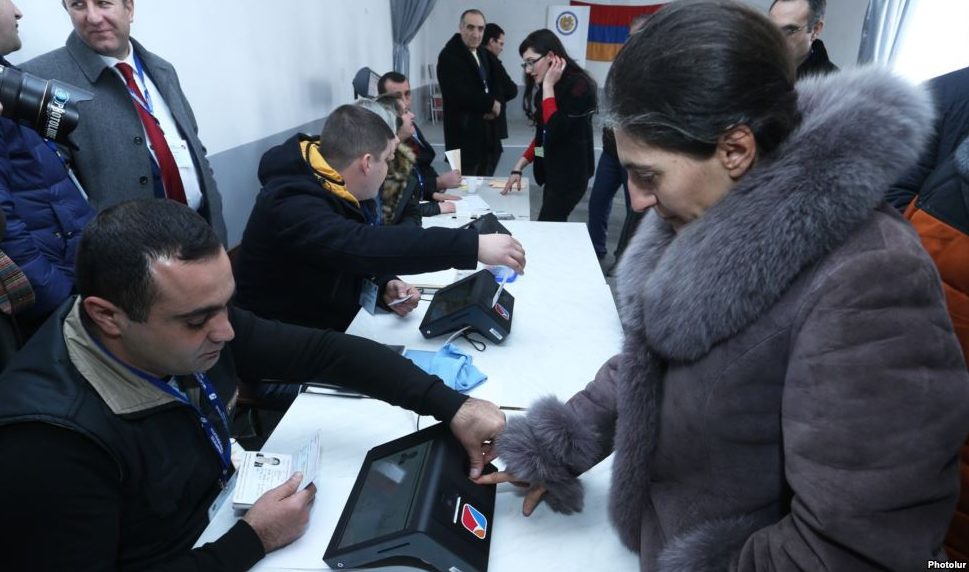 (RFE/RL)- Five political parties and four blocs will compete for seats in Armenia’s new parliament that will be elected on April 2, the Central Election Commission (CEC) said on February 17.

All of them submitted their lists of election candidates and other registration documents to the CEC just before the expiry of a legal deadline on Thursday evening.

“All submitted documents will be examined and as a result of that, a process of the registration of parties participating in the elections will be completed by February 26,” the CEC chairman, Tigran Mukuchian, told reporters.

With Armenia currently switching to a parliamentary system of government, the vote will determine who will govern the country after President Serzh Sarkisian serves out his second and final term in April 2018. Sarkisian’s Republican Party of Armenia (HHK) has made clear that it expects to retain control of the parliament.

The four other parties running for the parliament are Sarkisian’s junior coalition partner, the Armenian Revolutionary Federation (Dashnaktsutyun), the Armenian Revival party formerly allied to the president, the Armenian Communist Party and the pro-Western Free Democrats.

All of the four electoral alliances were formed recently. Two of them are led by businessman Gagik Tsarukian, whoseProsperous Armenia Party boasts the second largest faction in the outgoing parliament, and former President Levon Ter-Petrosian. The latter has been in opposition to Sarkisian throughout his nine-year rule.

The HHK will also be challenged by the Yelk alliance of the pro-European Civil Contract, Bright Armenia and Republic parties as well as a bloc led by former Defense Minister Seyran Ohanian and former Foreign Ministers Vartan Oskanian and Raffi Hovannisian.

Under Armenia’s Electoral Code enacted last year, the next National Assembly will be elected under a complex system of proportional representation. Armenians will be voting for not only parties and blocs but also individual candidates nominated by them in a dozen constituencies across the country.

According to the CEC, almost 1,200 candidates have been fielded in those constituencies and nearly 350 others will be running for the assembly on a national party-list basis.

The new parliament will have at least 101 seats. The parties and the blocs will have to win at least 5 percent and 7 percent of the vote respectively in order to be represented in it.

Campaigning for the elections will officially start on March 5.

Virtually all national elections held in Armenia over the past two decades been marred by opposition allegations of serious fraud and criticized as flawed by Western monitors.

Under a landmark deal reached with the parliamentary opposition, the Armenian authorities enacted late last year a set of amendments to the Electoral Code aimed at preventing serious irregularities, notably multiple voting. In particular, they agreed to introduce electronic verification of voters’ identity and live online broadcasts of voting in the majority of polling stations.

The United States and the European Union have allocated up to $10 million for the purchase of relevant equipment. While welcoming the government-opposition deal, they have cautioned that these anti-fraud measures alone cannot guarantee the freedom and fairness of the vote.

“The elections will be free and fair only if the government demonstrates the political will to make them so, and if the political opposition and civil society act responsibly to safeguard the process,” Richard Mills, the U.S. ambassador to Armenia, said on February 1.