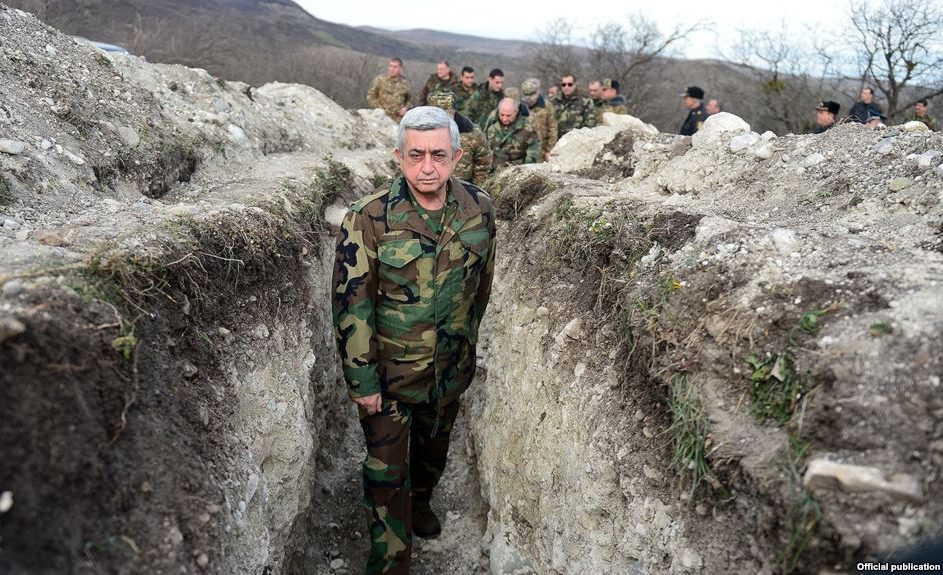 Sarkisian also told Armenian veterans of the 1991-1994 war with Azerbaijan to be prepared for renewed fighting around Karabakh as he addressed a weekend conference of the Yerkrapah Union, the largest of the organizations uniting them.

“Today some in Azerbaijan still have illusions that an Armenia focused on elections will be very distracted and therefore vulnerable,” he told conference delegates. “Based on those hollow illusions, the enemy may try to resort to new provocations.”

“I see it as my duty to declare from the podium of this conference that any possible provocation would receive a worthy response,” he said. “Politics based on illusions cannot have a future.”

Sarkisian went on to urge Yerkrapah Union members to “keep the gunpowder dry” in the face of a persisting military threat from Azerbaijan. “Our struggle is not finished yet,” he said.

The president repeated the same message when he met with the Armenian army’s top brass on Monday. “This is why I expect utmost vigilance from you in this period,” he told army generals.

Sarkisian said his government “will save no effort” to sustain the military balance with Azerbaijan. He also denied Azerbaijani claims that the Armenian side is seeking to prolong the status quo. Yerevan is committed to a peaceful Karabakh settlement based on mutual concessions, he said.

The Armenian elections will coincide with the first anniversary of the start of the worst fighting along the Karabakh “line of contact” since a Russian-mediated truce stopped the Armenian-Azerbaijani war in 1994. At least 190 soldiers from both warring sides were killed during four-days of heavy fighting sparked an Azerbaijani offensive.

Russia as well as the two other mediating powers — the United States and France — scrambled to halt the hostilities and bolster the ceasefire regime in the conflict zone. In their latest joint statement released on Friday, the U.S., Russian and French co-chairs of the OSCE Minsk Group again stressed that “war is not an option.”

Thousands of Yerkrapah members took part in the April 2016 fighting which is now commonly referred to as “the four-day war.”

In his weekend speech, Sarkisian reiterated the official Armenian line that Baku cannot forcibly regain control over Karabakh and Armenian-controlled territories surrounding it. “Many of you will remember that in the early 1990s, when Azerbaijan’s ministers of defense were replaced once a week, each of them viewed his duty to declare that in a week or a couple of days he will be drinking tea in Stepanakert,” he told the war veterans.

“However, as the history shows, through the efforts of the heroic sons of our nation not only did they not drink tea in Stepanakert but they were also deprived of the possibility of drinking tea in Aghdam, Fisuli, Jabrail, Kubatli, Karvachar (Kelbajar), and other places,” he said, listing Azerbaijani towns captured by Karabakh Armenian forces in 1993.