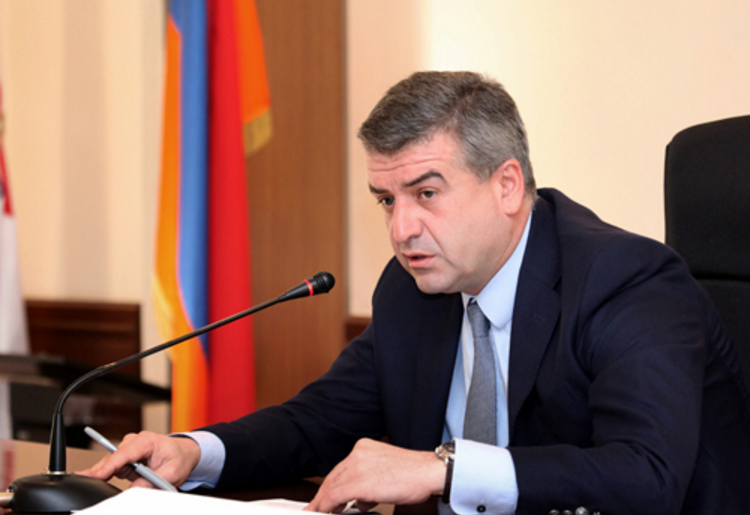 Armenia’ government will do its best to ensure that the thousands of ethnic Armenian refugees from Syria stay in their ancestral homeland for good, Prime Minister Karen Karapetian said on Thursday.

“We will provide every support to all those programs that are aimed at keeping Syrian Armenians in Armenia,” Karapetian told Syrian Armenian entrepreneurs in Yerevan.

“As a matter of fact, you have changed the culture of doing business and providing services in Yerevan and your success is extremely important to us,” he said.

Syria was home to of up to 80,000 ethnic Armenians before its bloody civil war that broke out in 2011. The mainly middle-class community has shrunk dramatically since then. Around 20,000 Syrian Armenians have taken refuge in Armenia alone.

Many of them have been struggling to make ends meet in the unemployment-stricken country. Some have opened small businesses such as restaurants and manufacturing firms, drawing on their business experiences in Syria.

The cash-strapped Armenian government has encouraged that entrepreneurship by subsidizing business loans extended by local commercial banks to Syrian Armenian businesses. About 60 such firms showcased their products at a German-sponsored exhibition in Yerevan in May.

But with Armenia’s economy still reeling from a deep recession suffered in 2009, many Syrian Armenian entrepreneurs are struggling to survive. Some of them frequently complain about the country’s problematic investment climate and a lack of government assistance.

Karapetian met with a group of such businesspeople to discuss problems encountered by them and ways of addressing them. Diaspora Minister Hranush Hakobian and several other senior government officials also took part in the meeting.

“The Syrian-Armenian businessmen focused on the activities of the Union of Syrian Armenians NGO, stressing the need to boost local production and exports, improve the terms for lending and the legislative field, as well as on other priority issues,” read a government statement on the meeting.

Karapetian urged them to submit their business proposals to the Armenian Ministry of Economic Development. “The Premier gave instructions to the agencies concerned on a number of issues raised at the meeting and expressed readiness to discuss with Syrian Armenian businessmen any question relevant to their business activities,” added the statement.

Visiting the United States in March, President Serzh Sarkisian said Armenia is ready to receive more Armenian refugees from Syria. He urged the affluent Armenian Diaspora in the U.S. and Europe to assist in their resettlement.

“Of course, it is painful for us to see the destruction of an Armenian community in the Middle East,” Sarkisian said in a speech in Boston. “But maybe it would be the least of evils if the overwhelming majority of the community members established themselves in their [ancestral] homeland.”